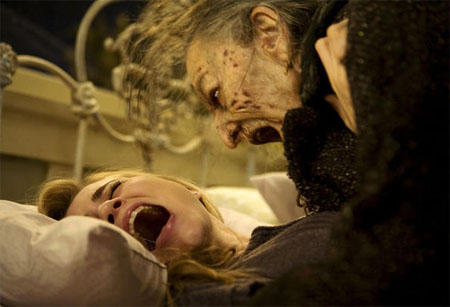 It cannot be an accident that one of Drag Me to Hell‘s central images involves loan officer Christine Brown eating a whole tub of ice cream without apology. And let’s be honest here. We’ve all been in that spot at some point. Christine, however, is lactose intolerant and she has a weight problem buried in her past. She does not care. She spoons down the ice cream anyway. It’s the ice cream that matters now. And while I don’t know how many uptight critics will declare this film some giant tub of ice cream, I’m here to tell you that Drag Me to Hell is one marvelous movie. It’s a grand and enjoyable gift from Sam Raimi — certainly more generous than his 2000 offering — and far more fun than I could have possibly anticipated. If you’re one of those types who’s forgotten the mad and anarchic joys of eating a whole tub of ice cream, then stick to the condescending remakes or reboots or revivals that are made solely to take away your dollars without granting you that cathartic liberation. (It’s worth noting that this movie does feature quite a lot of characters cavalierly asking for money. Perhaps it’s self-aware.) This movie, on the other hand, made me laugh and grin and holler and chortle like an undisciplined eight-year-old. Not many movies can do that. But this one did.

And it’s because Sam Raimi is clearly a man who loves movies. Not the junk shuttling out of the soulless factories supervised by Michael Bay and McG, but the silly stuff and the thrilling stuff. The loud sounds and spastic images that keep us returning to the movies. Raimi has a sense of humor that might be cruel if it weren’t so innocuously bizarre. The filmmaker who dared to insert a highly amusing and utterly gratuitous cabaret scene in Spider-Man 3 has gone even further here. And trust me: it’s all for the best. Here is a movie that introduces its protagonist stuck in traffic and listening to an elocution tape spouting forth such maxims as “There is no friction with the proper diction.” Here is a movie that features a nosebleed gone awry and gives David Paymer a line that is too goofy to be true. Raimi’s even slapped the old Universal logo from the 1980s at the head of his film. This is how movies used to be and could be again if only we wouldn’t settle for less.

Drag Me to Hell is not so much a return to Raimi’s roots, as some have suggested. It is a movie that successfully combines the eyeball-popping humor of the Evil Dead movies (don’t worry: eyeballs do pop here, despite the PG-13 rating), the fey dissolves of Darkman, the classy visuals of A Simple Plan (the deliberately framed crows are replaced momentarily by a cat’s coy positioning at bottom frame), Raimi’s more naturalistic experiments with actors in The Gift (here anchored by Alison Lohman’s earnest performance), and the empathy of the Spider-Man trilogy (thankfully not so sappy). Raimi, as it turns out, has been itching to give into his id all along. And we’re all the better for it.

If being a wild imp means having a vegetarian consulting a book titled Animal Sacrifices in the Services of Deities, then Raimi will go there. What I love so much about this movie is Raimi’s casual audacity. He’s balanced an earnest romance, some ridiculous and often side-splitting comedy, and some genuine jolts. A movie that dares to throw in so many disparate elements should not work this well. But it works because Raimi very much believes that it can work. And since he’s kept the budget fairly low, he doesn’t have to worry too much about studio interference. He’s given himself a safe place to experiment. But who knew the prototype would roll out like a top-of-the-line model?

Raimi even subverts the usual gender roles, perhaps to atone for the infamous tree-raping scenes in The Evil Dead. The ledger is now corrected. The men in this movie are often hilariously inept — one whimpers at a diner; another boasts of his coin collection — and the women often kick ass. Raimi even explores cringe domestic comedy during one utterly disastrous dinner scene with the prospective in-laws. A psychic and a professor argue about Jung. The camera whooshes as feverishly as Evil Dead II. And the movie even evokes Tolstoy with its lively ending.

Let me be clear on this. If you do not enjoy this movie, then you simply do not have a soul. Drag Me to Hell is a wild masterpiece. And I don’t think I’ll see another movie this year that’s anywhere near as enjoyable. Sam Raimi has restored my faith in Hollywood movies.