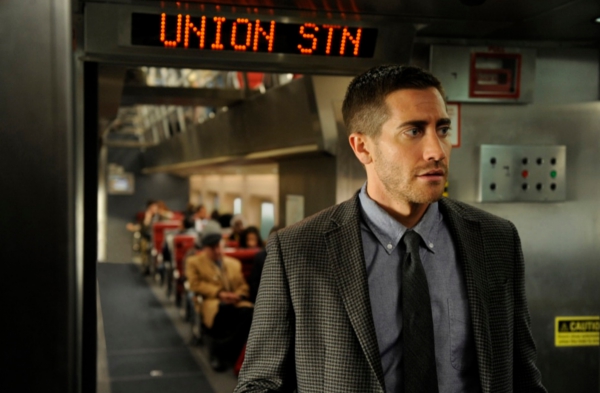 Like a dependable pulp novel kept on the nightstand as dutifully as a gun under the bed, Source Code comes stocked with some unexpected ammunition.

If you grew up watching time travel trash like 1994’s Timecop, 1989’s Millennium, or 1991’s Freejack, or you forgave the execrable television series Sliders because you hoped that the show’s incompetent writers could serve up some half-interesting angle on the parallel universe, then chances are you will enjoy Duncan Jones’s little thriller, Source Code. I am pleased to report that there is something more here than VHS nostalgia. The movie doesn’t have the ambition of Shane Carruth’s Primer or Richard Kelly’s Donnie Darko, but it does share in part the anarchistic exuberance seen in Nacho Vigalondo’s Timecrimes – especially when Source Code‘s protagonist starts hitting people.

The story involves Captain Colter Stevens (Jake Gyllenhaal), an ostensible soldier who flew helicopters in Afghanistan but who has no hard memories of his last mission. His spirit is beamed into a man on a Chicago commuter train during the last eight minutes of his life. At the end of each existential installment, he is blown to bits by a bomb. Before this, I had thought a shaky theatrical act getting assailed by rotten fruit was the height of humiliation. (And it seems that Jones has anticipated my worldview. One of the train passengers is a television comedian.) Shortly after Stevens is “killed,” he is then pressed for details by a woman (Vera Farmiga) who doesn’t seem to comprehend that being repeatedly subsumed in an explosive fire is likely to cause a touch of disorientation, to say nothing of PTSD.

This is all part of an experiment called Source Code. Later in the film, we are given some adorably dodgy science about the brain’s electromagnetic field, curiously similar to Johnjoe McFadden’s theories. Just before death, the brain has the ability to take an eight minute memory of its final moments. And this is why Stevens can wander about a train. Who knew that the mind was a 7-11 security camera? The vital question of whether Source Code can be used to recall some of humanity’s most inebriated evenings is never pursued.

Stevens’s purpose is to find out who the bomber is so that a much larger explosion, purportedly prepared by the same individuals and threatening to take out the Windy City for good, can be stopped so that Uncle Sam doesn’t have another pretext to strip away more civil liberties. Every entry into this eight minute universe involves Stevens (or, rather, the man he’s leaped into) dodging a woman spilling a cup of coffee, responding to his fetching coworker Christina (Michelle Monaghan) while she’s telling him, “I took your advice. It was good advice. Thank you,” handng his train ticket to the inspector punching holes, and listening to a boorish bourgie man across the aisle complaining about the train being late. Given these limitations, the filmmakers are successful in constructing a universe that generates interest through slight alterations. What happens if you get off the train? Or if you disarm the bomb? Or if you just start hitting people? Or if you frighten a poor woman on her way to work?

If this sounds as if I’m damning the movie with faint praise, I’m not. I enjoyed the flick quite a bit. But in light of a recent publicity fiasco, I feel that some modest corrections are in order. Director Duncan Jones has repeatedly mentioned in interviews that JG Ballard is one of his favorite writers. And it has reached the point where some of my friends – the kind of smart people who have “JG Ballard” set up as a Google News alert – have expressed interest in the movie. These Ballard soundbytes suggest that Jones is either somewhat literate or wishes to cultivate a potential audience who reads. But Ben Ripley’s screenplay has no great philosophical ambition, much less any suggestion that he (or Jones) is even vaguely familiar with Ballard. The movie actually owes more to the supremely underrated television series, Quantum Leap. (Jones, to his credit, has honored his inspirational influence by including Scott Bakula’s voice in a cameo.) Nor can the movie, despite its Linux-friendly name, be said to be very tech-friendly – especially when you start considering the preposterously effortless manner in which the phones inside the movie can access military information.

This is mass entertainment, folks. But it’s old school mass entertainment. Source Code is the type of small concept-driven movie that was fashionable fifteen years ago and that very much needs to be part of the regular crop of releases again. Like a dependable pulp novel kept on the nightstand as dutifully as a gun under the bed, Source Code comes stocked with some unexpected ammunition. Who is the eccentric and handicapped scientist played by the great Jeffrey Wright? Why is our hero trapped in a room that is getting very cold? Why is he not allowed to leave? Why is he asked to recall the Queen of Spades as if he’s a shark counting cards at a Vegas blackjack table?

In our present epoch of hollow CGI spectacle, we’ve taken the art of basic narrative questions very much for granted. So a movie like Source Code, which would probably merit ho-hum reviews if it had been released in the mid-1990s, becomes a rare lily to be plucked from the top of a dunghill. I hope that the film is commercially successful so that the business of telling real stories becomes a higher priority among the amental Hollywood thugs who believe that three reboots of the same comic book franchise over ten years is the way to win audiences.