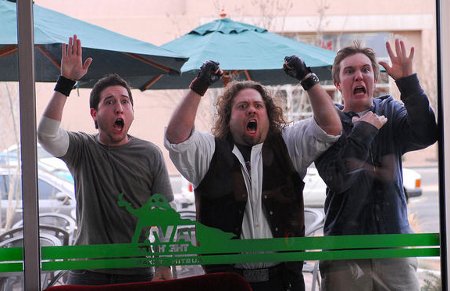 There have been nearly eighteen months of production problems for Fanboys, the comedy film made by geeks for geeks involving a 1998 pilgrimage to Skywalker Ranch to steal a rough cut of The Phantom Menace. A rough cut of Fanboys made the rounds in 2007, earning plaudits from George Lucas and Kevin Smith, with the former granting permission to use Star Wars sound effects and the latter asking for and receiving a cameo. More money was allocated to director Kyle Newman to shoot additional scenes that were prohibited by the original version’s five million dollar budget. Months passed, as Newman attempted to extricate the actors from their respective obligations. Additional scenes were shot. Then there were reports that the film was being saturated with more crude jokes with the cancer plot removed. (Having seen the film, I can report that the cancer plot has metastasized.) Fanboys was scheduled to come out last year, but it remained in the vault. There were delays and a few inquiries from online circles, and an Internet campaign eventually emerged demanding that Newman’s original vision be restored. But this week, Fanboys is finally being unfurled into theaters, perhaps with a few “Greedo shoots first” compromises. And I’m pretty certain that additional speculation will spiral into more online melees.

But I have only the version I screened to go by. If there are better versions of the film to be made, this will likely have to be settled by Phantom Edit man Mike J. Nichols. As cheap thrills go, Fanboys isn’t bad. The film won me over. It plays like an Animal House for geeks, and, if Jeffrey Lyons snoring through half the movie is any indication to go by, it will likely not appeal to entitled snobs who remain incurious about this subculture. But I think it has a pretty good shot of finding an audience in the heartland.

Ernest Cline’s screenplay has reportedly been bouncing around since 1998, but his collaborators (Dan Pulick credited on the story and Adam F. Golberg credited on the screenplay) have transformed the film into a celebration of geek culture just before the dawn of a new millennium. After a scrolling yellow prologue with a “Sent from my iPhone” postscript, we’re then taken to Ohio 199 days before the Phantom Menace release date. Chumbawumba’s “Tubthumping” blasts at a house party, where stormtrooper and Super Mario costumes are copious, with a “Picasso’s blue period” thrown in for good measure. This is still the time of dialup, and a bespectacled geek named Windows (Jay Baruchel) has secured an online girlfriend. Windows is so consumed by his perfervid IMing that he cannot even notice a geek girl flashing her breasts in his direction. Hutch (Dan Fogler) lives in a garage, paying rent to his parents. He insists that he lives in a “carriage house.” Then there’s Eric (Sam Huntington), the “responsible” character you typically find in these teen comedies who works at his father’s car lot and is primed to take over the business. This trio learn that their pal Linus (Christopher Marquette) is dying of cancer. A trip to California is agreed upon.

As you may have already guessed, this setup follows any number of cinematic formulas. But much like the original Star Wars trilogy, Fanboys is more about the journey, rather than the destination (or even the beginning). It does find a few funny moments that prevent this film from entirely succumbing to stereotyping. An R2D2 Pez dispenser is confused with a prominent member. Hutch, who drives a van adorned with Star Wars detailing, sets a few ground rules: “All Rush, all the time” is the only music to be played during the cross-country journey. There’s a side quest to Riverside, Iowa — the birthplace of James T. Kirk — in large part because Hutch says, “I’ll drive all night for the chance to pimp dog some Trekkies.” And this pugilistic vow is carried out over the preposterous question of whether Han Solo’s a bitch. A Star Wars fan has unthinkingly burned in a Jar Jar Binks tattoo without knowledge of the character.

A sequence involving peyote and stripping, suggesting that geeks are as marginalized as gays, doesn’t quite live up to its potential, nor does a running gag about Hutch having one testicle. But the film does poke some insinuative fun at all the forthcoming junk that those associated with Star Wars will soon be involved in. When the group discusses whether or not Harrison Ford is the greatest actor of all time, the van passes by a Six Days Seven Nights billboard. I also enjoyed the idea of Harry Knowles portrayed as an ass-kicker in the know, where trust is established by the number of esoteric film facts at your immediate disposal.

Many of the film’s cameos — which include William Shatner, Carrie Fisher, and Billy Dee Williams (as Judge Reinhold) — are funny. Some, like Kevin Smith and Jason Mewes, are just pointless. The film quotes lines from the original Star Wars trilogy liberally, but not obnoxiously.

The film also delves a bit into geek double standards pertaining to gender. During a moment in Vegas, the aforementioned geeky girl Zoe (played by Kirsten Bell) flirts wildly with Windows, but he and Hutch see only the airbrushed professionals. And while Windows and Hutch do receive a collective comeuppance for their oversight, I wondered whether there may have been something more here lost in all the reshoots and the rewrites.

Fanboys isn’t as good as 1998’s Free Enterprise, largely because Mark A. Altman and Robert Meyer Burnett went to the trouble of portraying geeks as real people. It doesn’t quite have the guts to plunge completely into the complexities of geekdom. And my main gripe with Fanboys is that the “real” moments here were terribly treacly. Perhaps there was some reasonable justification for attempts to rework the cancer plot. But I did laugh, and the film that emerged from the fracas does entertain.