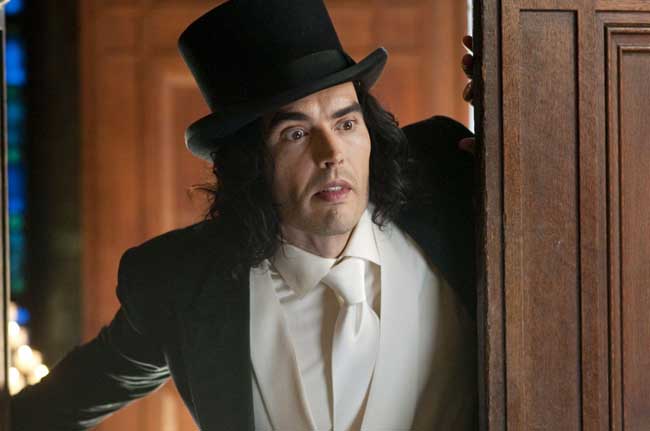 Arthur‘s story logic is so implausible that it has become necessary to pinpoint the insufficient hackwork of scabrous sellouts.

Option (A) You can spend the night with a woman who is dressed in a metal outfit, and who is somewhat drunk but lucid. She’s hiding in your bedroom, and your bed incidentally is a magnetic platform. She would like to give you a night of carnality, one that you didn’t expect. She has a whip. She declares herself a cat.

Option (B) You can spend the night with a woman who dresses in a childish polka dot dress, one whom your butler Hobson (played by Helen Mirren, who is phoning it in here) rightfully describes as “Minnie Mouse.” The second woman is nothing less than timorous. She marvels over the Pepe Le Pew cartoon playing in your private screening room. This woman, unlike another woman once played by Liza Minelli who stole ties and smoked cigarettes and encouraged mischief and dressed interestingly, is about as hot and dangerous as a dying titmouse squiggling in a glue trap.

Call me crazy, but I’m pretty sure that most men – unless they are gay, shy, highly introverted, or celibate – would choose Option (A). But Arthur, played by Russell Brand in his 2011 incarnation, chooses the second option.

Why doesn’t the Arthur remake work? Well, we can accept toothless director Jason Winer’s complicity in this implausible story logic. After all, Winer cut his teeth directing episodes of Modern Family, a television series so toothless that it did not included a moment in which its gay characters, Mitchell and Cameron, kiss on screen during its first season.

Yet when one considers that screenwriter Peter Baynham — a man who has worked alongside such accomplished comedians as Christopher Morris (The Day Today), Steve Coogan (It’s Alan Partridge), and Sacha Baron Cohen (Borat) – was involved, then it becomes necessary to pinpoint the insufficient hackwork of these scabrous sellouts.

Let’s say that you’re a calculating studio executive who misunderstands human nature (or a craven screenwriter known named Peter Baynham bending at the knees when offered a large bag of cash). Your mind is likely to come up with sentiments along these lines:

Unfortunately, in your pursuit of money, you fail to comprehend that none of your reworking makes any fucking sense. Your decision to rethink the elements of the original Steve Gordon script that worked so well (an alcoholic wastrel discovers that love encourages his dormant empathy and pro-active behavior; he is more true to himself and doesn’t feel as alone) becomes something illogical (a wastrel, who is kinda alcoholic and not terribly active at anything, discovers that people will do his bidding with or without money).

Consider the beginnings of the two films. In the original, a drunken Arthur (Dudley Moore) rudely accosts two prostitutes from the window of his Rolls-Royce. We see that his chauffeur Bitterman also has to suffer through his terrible jokes, but isn’t merely a doormat. He actually resists Arthur’s commands. (Indeed, this inversion of class expectations was one of the reasons the originalArthur was such a hit.) Director Gordon is careful to instruct Moore to have his glass of scotch arched upward during his exchange with the prostitutes. Visually, we understand that this man has a drinking problem. Emotionally, based on Bitterman’s actions, we understand that he may be a decent guy when he’s away from the hootch. In the remake, Bitterman is seen squeezing into a Robin costume, with his paunch pushing out (thus, unlike the original film, establishing a lack of dignity). Arthur is dressed as Batman. The car that Bitterman drives isn’t a Rolls-Royce, but the Batmobile. What does this say to the audience? Visually, we have no clue that Arthur is an alcoholic. He comes across more as a spoiled brat and we can only find sympathy in the character through Russell Brand’s enormous energy. Emotionally, we are invited to laugh at Bitterman’s willingness to do anything to appease his master. (Just imagine the comic potential of Luis Guzman, the talented fast-talking character actor who plays Bitterman in the remake and who is needlessly wasted, upbraiding Arthur in ways that only the audience can perceive!) And because the character relationship is so predictable, we have little reason to care.

Russell Brand shouldn’t be blamed here, but he will if this movie tanks hard at the box office. The wild anarchy that made Brand such a draw as Aldous Snow in Forgetting Sarah Marshall and Get Him to the Greek is only here in spurts. Consider one moment in a prominent candy bar (deliberately unnamed to discourage product placement), where Brand, dressed in a gummy costume, is briefly seen swigging a flask while entertaining children. That split-second moment might have inspired some inappropriate comedy, but company man Winer (the Zack Snyder of comedy?) doesn’t want to upset his soul-sucking overlords and keeps Brand on a leash.

Even accounting for these limitations, Baynham’s script and Winer’s direction just isn’t capable or courageous enough to give the talented Brand an opportunity to develop a character. In the original film, Moore’s overbearing laugh always signaled to the audience that Arthur was drunk, and how Moore often drifted into lucidity. This careful telegraphing suggested a good-hearted man beneath the excess. The 1981 Arthur was brazen enough to drive to Queens while drinking from a brown bag. No such disastrous pro-active behavior from the 2011 Arthur, who has to be driven everywhere and doesn’t even know what Outlook is.

Yes, both films feature a moment in which Arthur hands his love interest a check and she rips it up. But the 1981 Arthur learns from that moment, while the 2011 Arthur does not. It’s understood in the 1981 version that Arthur will let Linda (the Liza Minnelli character) pursue her acting ambitions through her own initiative (the underlying assumption is that both Arthur and Linda will love each other outside of Arthur’s wealth, because they accept each other; Arthur is still a drunk at the end). But in the 2011 version, Arthur actually purchases Naomi’s dream, which is to become a published writer. I won’t even get into the film’s laughable ignorance of the publishing world, which had my moviegoing companion (a publishing reporter) and I howling. Let’s forget all that. If you’re a woman who has worked long and hard on a manuscript and has seen it accepted rather swiftly for publication, and you discover that the man trying to woo you (a man, incidentally, who has lied about having a fiancee) has had his company purchase your manuscript, can you honestly forgive him for deflating your shaky sense of meritocracy? (It doesn’t help that Naomi is played by the thespic cipher Greta Gerwig. She’s nothing less than a smiling doormat expressing nothing less than enthusiasm, even as Arthur downs loads of alcohol. She reminded me just how annoying Bonnie Langford was as the chirpy and clueless companion Melanie Bush on Doctor Who.)

Class, which guided the original Arthur, has been largely dispensed with. In 2011, “working class” means visiting a woman who lives off the elevated subway line. (The beauty of the original Arthur is that the rich only needed to mention the subway to taint it.) The 1981 film also allowed Bitterman to drop Linda off in front of her apartment complex, so that she could fool her neighbors and Bitterman could play mock chauffeur. This moment allowed both Linda and the audience to parse the frivolous nature of wealth. By contrast, the 2011 remake uses inflated excess as the basis for its romance, with Arthur wooing Naomi by closing off Grand Central and having a dinner at a table surrounded by rosebuds, with acrobats bouncing around on another level. What’s for dinner? Dispenser candy. If that isn’t romantic enough for you, then consider the many permutations of SpaghettiOs (never named, presumably because the studio couldn’t get Campbell’s to agree to shell out the chowder for product placement) that Arthur and Naomi eat for dinner.

The original Arthur offered a perfectly reasonable fantasy that one may find a comfortable adulthood while also keeping the inner child alive. By contrast, as the childish menu options I’ve cited above suggest, the remake is about how one’s adulthood is defined by being nothing more than a passive and entitled child. It’s a troubling sign that the Comic-Con geek mentality has crept into mainstream romantic comedy. What the filmmakers don’t understand is that fantasies must have some element of reality in order to persuade. But Arthur, much like its protagonist, gives nothing to the audience. It is a spoiled movie written and directed by spoiled people who deserve to be sent to the poorhouse.