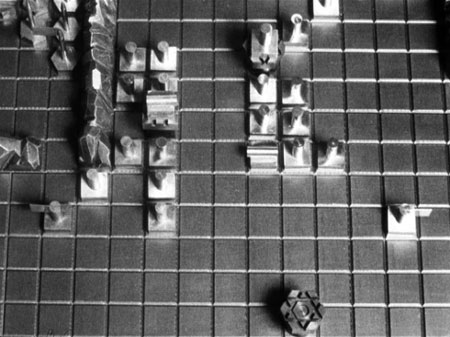 [This is the fifth part in an open series of reports from the New York Film Festival.]

Several people who are much smarter than I am have written plenty of words about Guy Debord’s 1978 film, In Girum Imus Nocte Et Consumimur Igni, a title which I must confess is rather difficult for me to type without looking at another browser window (currently open, right next to a minimized Explorer window urging me to search through “My Computer” and presumably my soul) and ensuring that I am not making a spelling mistake. (Yes, I could cut and paste the title, like your typical hack journalist would. And I suspect, given the thin crowd I observed, very few will actually write about it, claiming the film to be too difficult or too sophisticated. But I wish to respond to the more troubling typing gaffe at hand. Speaking only for myself, I retain some small hope that I might actually type in this Latin palindrome correctly with repeated effort. Incidentally, in case you might be wondering, this phrase stands for “We Turn in the Night, Consumed by Fire.”) And several people who are much smarter than I am will indeed be discussing this film on Friday, October 3. But I don’t believe Debord, the man best known for his Situationist activities (and if we mere consumer slaves take this film at face value, Debord was one of the finest egotists that mid-20th century French philosophy had to offer) would have approved of this staged commentary. The film, after all, ends with the subtitle: TO BE GONE THROUGH AGAIN FROM THE BEGINNING. Which I think is a pretty clear instruction. So would it not have made more sense for the good people at the Lincoln Center to simply play the film twice for the benefit of any party who may not have parsed Debord’s words correctly the first time around, rather than to have talking heads attempt to explain the film for the audience? The assembled parties, last I heard, had no intention of excusing themselves.

And I certainly don’t believe that Debord would have approved of some balding blogger, who is, at present, clutching a copy of the film’s script that was kindly handed out by the good people at the Lincoln Center and is now again getting lost in Debord’s considerable thoughts, their relationship to the images, and is wondering why very few people make films quite like this anymore and what possible “take” I might offer.

For that matter, I don’t think that any reader (and especially French philosophers) would approve of these last two paragraphs, which are mired in needless clauses and parenthetical asides, and don’t really get anywhere close to conveying my rather amazing cinematic experience on Saturday morning, in which I was barely awake, peering around desperately for a caffeine drip, greeted in the dark by a dry and bitter French voice unloading a steady stream of anti-consumerist language, followed by personal adventures in the Left Bank that were truly not that different from the usual n+1 ravings (i.e., douchebag entitlement), but becoming, nevertheless, quite fascinated by the images of pilfered trailers from mediocre films, endless tracking shots across water, and assorted stills of overhead shots of Paris, various grids, and crummy-looking buildings.

This was indeed Paris, ten years after the riots and the failed experiment. And Debord, in 1978, did not like it one bit:

It was in Paris, a city that was then so beautiful that many people preferred to be poor there rather than rich anywhere else.

Who, now that nothing of it remains, will be able to understand this, apart from those who remember its glory? Who else could know the pleasures and exhaustions we experienced in these neighborhoods where everything has now become so abysmal?

Now the degree to which you can accept the veracity of this statement will probably inform the degree to which you enjoy Debord’s film. This is a man, knowing very well that he has enslaved his audience for 100 minutes, who proceeds to kvetch even grander than Jean-Paul Sartre. He often removes the images entirely, giving us either all-black and all-white for several minutes, so that the audience will be reminded of who is in command. (The film was made in an epoch before the remote control offered us the mute button.) He prides himself in his voiceover for being an intolerable gadfly. He regrets nothing, saying to us, “I remain completely incapable of imagining how I could have done anything any differently.” He suggests that he and his fellow gadflies are somehow superior because they did not apply for grants and did not go on television. Those who have not begun to live in some individual (and presumably Debord-like) fashion “are waiting for nothing less than a permanent paradise,” which might be identified as a job promotion or a total revolution. But Debord’s purpose was actually quite simple: “For our aim had been none other than to provoke a practical and public division between those who still want the existing world and those who will decide to reject it.”

I’m making Debord come across like an insufferable asshole. And while this may be somewhat true, the salient point I took away from this film was that there is now nobody like Debord who is telling the truth like this — even if Debord himself only half-believed it. It seems that something terrible has been lost in the last twenty years. A dessication of identity. A capitulation. I am not aware of anybody using the great possibilities provided to us by YouTube making a film like this who doesn’t care about the audience and who doesn’t care about how their offerings are perceived. It’s all about giving into the slim possibilities of fifteen minutes of fame, rather than living a lifetime of unapologetic infamy.

So Debord’s film comes at us forty years later reminding us that there was an altogether different type of provocateur who held various mediums hostage and used this to extort an audience into challenging their assumptions. Tout à fait brillant! If anyone will now listen to the man, his words are perhaps more important than any of us anticipated.