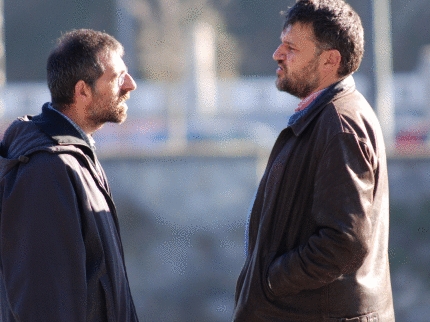 [This is the ninth part in an open series of reports from the New York Film Festival.]

Your intrepid reporter has lined up several interviews with filmmakers and has even braved a press conference. (I try to be spontaneous whenever I attend mammoth expositions of this sort, but I wasn’t entirely aware that there was a press conference component to some of the screenings. A good reporter, however, always comes prepared. Just don’t ask what essential items I have in my backpack. I’m sure that my arsenal is somewhat unorthodox. But among the ordnance was some equipment to perform a little experiment.) The press conference did not quite work out to my satisfaction, but I now have a plan in place that should work well for next week.

I saw two films today: one very, very good, the other very, very bad. And there’s still have another film (good) from yesterday that I need to cover. So let’s get the bad apple out of the way first, shall we?

Jaime Rosales’s Bullet in the Head, which by no means should be confused with John Woo’s entertaining 1990 action flick of the same name, is a sleep-inducing mess that should be avoided at all costs. If you’ve been reading the nearly 10,000 words (!) I’ve generated here, you may recall that I expressed certain reservations with Serbis. I was fairly certain that I wouldn’t see a film that could be worse. Much to my regret, I was proved wrong this afternoon. (It’s a strange coincidence that probably means nothing, but I must point it out. Both films feature a sound mix loaded with intrusive street traffic.)

Despite copious quantities of coffee that were ingested very carefully in the morning, your intrepid reporter was forced to slap his cheeks in order to stay awake. Not just once. Four times. Unfortunately, I was not armed with a large trout that could probably wake me up in one slap. So I had to settle for palms that needed to do it in four. I caught a glimpse of my mug in the mirror about an hour ago and espied a slightly pinkish mark from these pelts. Let it not be said that your intrepid reporter nodded off on the job. I cannot say the same for some of my colleagues.

Let us be clear. Within Rosales’s film lies a perfectly interesting concept for a good 15 minute short. This is a film determined to tell its story without a line of dialogue. And with the exception of a character yelling “Fucking cops!” twice, it clings quite devoutly to this credo. I presume that this “artistic” choice was made so that the film would stand a better chance of being accepted into film festivals around the world. Or maybe the idea here was to cut down on the subtitling bill. Whatever the motivations, Rosales’s approach shares much in common with the flawed but interesting 1952 film, The Thief, which starred Ray Milland as a physicist and did not feature a single line of dialogue. But The Thief, for all of its problems, at least gave us an FBI agent pursuing Milland and featured the Empire State Building. Rosales’s film, by contrast, features not a single distinguishing landmark. Nor is there an FBI agent.

I would have liked an FBI agent.

There are, however, two cops. But they don’t really look like cops and they don’t really offer what one might identify as cop-like behavior. Instead of the character shouting “Fucking cops!,” he might have yelled “Fucking nondescript guys around thirty!” I contend that this would have been a slightly subversive and more entertaining line of dialogue for Rosales to deploy. And if Rosales had inserted this line into the movie, I would have been the first to declare Rosales a genius. But “Fucking cops!” is what we have to work with here. So “Fucking cops!” it shall be.

Bullet in the Head, for its first hour, doesn’t clue us into the possibility that there might actually be a bullet fired into someone’s head. The film saves this violent moment for later. So if you’re looking for a bullet in the head, you’ll get one. Just don’t expect anything spectacular. And I may have spoiled the film a bit by pointing out the cops. But maybe I’m not really giving anything away because the movie is, after all, called Bullet in the Head. So there’s a certain promise here in the title that the film has to live up to.

We see characters talking behind windows, across the street, at the other end of a restaurant, and at pay phones. Strangely enough, nobody in this movie seems to own a set of blinds or drapes. Which strikes me as damn curious and damn convenient, especially since we see the stoic Ion (played by a burly guy named Ion Arretxe, which suggests that Rosales is quite lazy in naming his characters) getting it on with his girlfriend/wife. Rosales, to his credit, does occlude our view of the events quite frequently, having people pass while the camera pans, thus deliberately mangling the camera move. He does sometimes choose interesting and incongruous audio to play over the visuals, such as a basketball court in the film’s establishing shot of Ion’s apartment. The actors don’t overexpress with their hands too much. And there is one amusing moment at a restaurant in which three people try to look over at another table without suspicion, and their body language indicates how obvious their efforts to be sneaky are.

But this film isn’t called Views Through a Window. It’s called Bullet in the Head! And your intrepid reporter, being a patient man, eagerly awaited a payoff. But there was none. There was indeed no compelling narrative to speak of. No particular detail within the apartment decor that might have said something about the characters. But I can assure you based on the number of eating shots that Ion is a character who likes to eat.

I suppose I would have enjoyed this film if I could (a) read lips and (b) read lips that spoke Spanish. But I am only slightly competent in (a) and utterly incompetent at (b). And if Rosales really wanted us to know what the characters were saying, he would have provided us with audio and/or subtitles.

So what we have here is a pretty disappointing film — indeed, one so disappointing that there was an audible hiss from the critics when the credits rolled. And while I’m not a guy who likes to fall into critical consensus, I will admit that the hissers had a good point. I certainly hope that Rosales’s misfire doesn’t hinder other filmmakers from making films without dialogue. There is much within our body language and our actions that is interesting without silly lines getting in the way. But these future filmmakers may want to consider including an FBI agent.