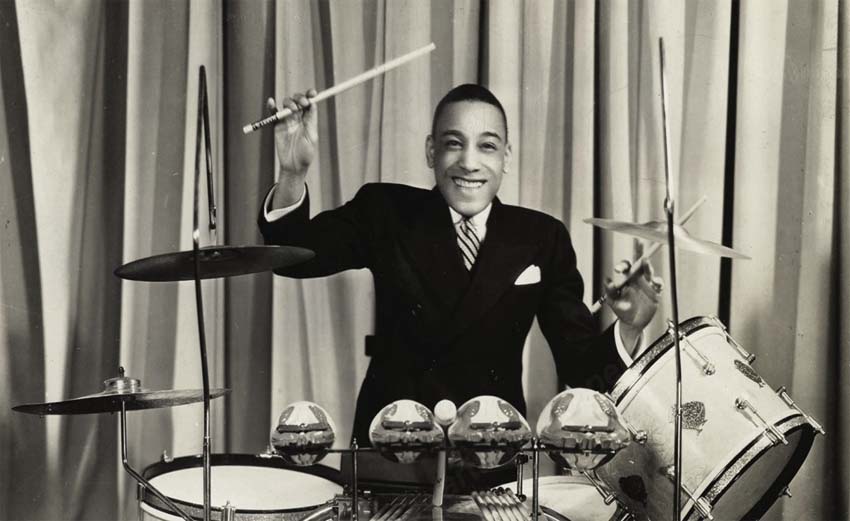 In this first dispatch from the New York Film Festival, we revisit Chick Webb’s legacy in a flawed but engaging documentary.

[This is the first in a series of dispatches relating to the 50th New York Film Festival. All of Reluctant Habits’s NYFF posts can be located here.]

His name came from a tough tumble down Baltimore stairs. They called him “Chicken” because that was the way he walked: wobbly and hunchbacked and sometimes a little alone around the schoolyard. They shortened the name to “Chick” because the single syllable rolled faster off the tongue. But Chick Webb had the grit to hawk newspapers and saved up enough dough for a drum kit. They figured he might build up his upper body strength if they kept him hammering young and long and hard on the drums.

The biggest surprise about Jeff Kaufman’s documentary, The Savoy King: Chick Webb & The Music That Changed America, is how Chick Webb’s mesmerizing life is diminished by the clumsy collection of stray biographical tidbits (Chick liked motorcycles, Chick was a snappy dresser, Chick had a German Shepherd), which don’t quite coalesce into a true narrative trajectory until the film stretches itself across a more expansive canvas. The film serves up many prominent voices (Bill Cosby as Webb, Janet Jackson as Fitzgerald, Jeff Goldbum as Artie Shaw, Andy Garcia as Mario Bauzá, and so forth) as profound movers and shakers in the 1920s and 1930s swing scene. But when we know Chick argued with Jelly Roll Morton, why do we need the former Jello pitchman? This minor dissonance also hinders the film from fully portraying or explicating Chick’s innovative drumming (“He sounded very different from any of the other drummers,” says one subject, to which one must ask, “Care to elaborate?”).

Chick Webb was so legendary that the Harlem streets were congested with more than 10,000 people on the day he died. Gene Krupa said that Webb was the only other drummer who “cut” him. In light of these vital details, it’s surprising that Kaufman races too fast over such details as Chick’s loyalty to his longtime guitarist John Truehart, the only member of Chick’s band who kept with him all the way through, and is sometimes too willing to buy into the Webb myth. (For example, Charles Linton told biographer Stuart Nicholson that Webb only said that he adopted Ella Fitzgerald “for the press people,” yet Kaufman is quite willing to go on with the mythos of Webb as Fitzgerald’s legal guardian.)

When many of the charming survivors (especially the ebullient choreographer Frankie Manning, captured here in his final years and in remarkable shape) are happy to spill Kaufman the story, why have other people get in the way? The Savoy King has greater success with dodgy-looking visual aids (such as the Indiana Jones-like map depicting Chick’s relentless touring schedule across the States in 1937) than the high-profile vocal cast.

But when the film shows the Savoy’s impact on American culture, displaying its contours with a computer simulation of the Savoy’s interior, it becomes a more meaningful exploration of the swing scene. The film obviously worked on some level with me, because I am playing Ella Fitzgerald as I write these words and I have a great desire right now to time travel back to the fateful evening of May 11, 1937, when Chick Webb and Benny Goodman duked it out in a battle of the bands at the Savoy. When the film reminds us that there were clubs in which a racist rope separated the dance floor down the middle and when it tells us that, in other clubs, blacks had to pay the same admission as whites to watch an act from the balcony (and weren’t allowed to dance) and when we recall that even the much vaunted Cotton Club would not admit African Americans, the Savoy’s pioneering efforts, taken with what others remember of Chick’s great generosity and energy, feel like a forgotten historical chapter that can’t be reread often enough.