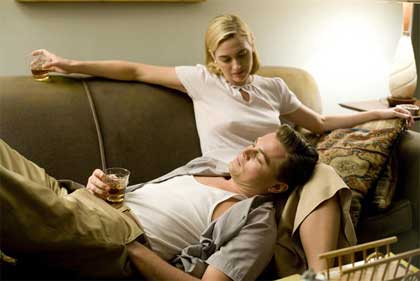 In Blake Bailey’s A Tragic Honesty, an excellent Richard Yates biography, Bailey depicts Yates’s efforts to adapt William Styron’s Lie Down in Darkness for director John Frankenheimer. The film, as we all know, was never made. And although Yates took this lucrative gig to whirl away with the money, this didn’t stop the troubled and cash-strapped literary master from writing to the requirements of the cinematic medium. Yates included careful music cues (“light, tinny, inexpert” xylophone music to be played during a moment of rage), specific camera angles, and even facial expressions, but, above all, he remained faithful to Styron’s text, condensing and tweaking the narrative without sacrificing its visceral dynamic. To tamper with Styron too much or to water it down would involve a conventional and pointless facsimile, a flaccid adaptation dishonest to Styron and the possibilities of cinema itself.

Bailey concludes that Yates’s screenplay “may have amounted to a great movie adapted from a great novel.” And he quotes Frankenheimer forty years after Yates’s labor: “God, it’s good. I’d still like to make that movie.”

It’s doubtful that the team behind Revolutionary Road had any solicitude like this in mind. Justin Haythe’s unpardonably distilled screenplay “adaptation” manages to whittle away all that was interesting within Yates’s book. It is, like the 1974 film adaptation of The Great Gatsby, a dull and literal winnowing of a literary masterpiece. You know you’re in trouble from the get-go when Yates’s opening chapter in a community theater, which masterfully sets up the artifices of the Wheelers, is replaced with aloof flashbacks.

Clumping their heavy galoshes around the stage, blotting at their noses with Kleenex and frowning at the unsteady print of their scripts, they would disarm each other at last with peals of forgiving laughter, and they would agree, over and over, that there was plenty of time to smooth the thing out. But there wasn’t plenty of time, and they all knew it, and a doubling and redoubling of their rehearsal schedule seemed only to make matters worse.

Granted, it takes a screenwriter of exceptional talent to process those precise interior sentences into the visual exigencies of the film form. But Haythe is incapable of introducing anything that might permit us to see the wheels spinning in Frank’s head. Nor is director Sam Mendes up to the task of reinventing the Wheelers by establishing behavior that is as specifically rendered as Yates’s prose. 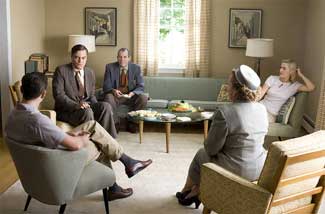 Instead of the backstories associated with this disastrous local theater run, we see Leo and Kate (certainly not anything close to Yates’s Frank and April, and considerably removed from Cameron’s Jack and Rose) looking across at each other at a party. But we have no real sense in the film of why these two would be attracted to each other, and, because of this, there’s no real reason to care. It doesn’t help that the Wheeler household looks more like a Pottery Barn catalog than a middle-class dwelling in 1955. And it doesn’t help that Mendes cannot even depict two pivotal acts of carnality with accuracy. (In the Mendes universe, couples have passionless sex and finish each other off in twenty seconds without even the tiniest whimper of pleasure. This is as preposterous and implausible as Sharon Stone’s over-the-top masturbation scene in Sliver. In a narrative that demands close verisimilitude, this is an inexcusable artistic decision.)

There’s a better effort to account for the Wheelers’s emotional deadness later on in the film, when the Wheelers sit down for breakfast after a fight. Leo and Kate deliver their lines in a husky and stilted manner, and the stale atmosphere in this scene is perhaps the closest this film comes to making something stick on the screen.

Nevertheless, I wondered if director Sam Mendes had really wanted to make this movie. Did he even understand the book? Had he even read it? In book form, Revolutionary Road is, among other things, a harrowing portrayal of potential castrated in the comforting traps of suburbia. And if you’re going to make a movie from this, you need an actor in Frank Wheeler’s role who is not only capable of selling us the masculinity muted beneath the cube worker, but you need someone who can intuitively grasp the emotional complexities carefully embedded inside the novel. 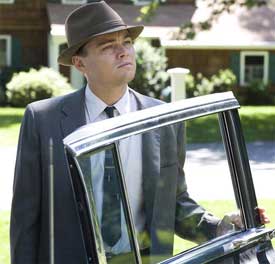 Leonardo DiCaprio is not that man. He demonstrates little thespic understanding of what it means to be stifled. He gives us nothing in the way of sorrow, save the cartoonish wails and the exaggerated throwing of physical objects from surfaces. DiCaprio has been relying on this ever since a few people convinced him that he was a serious actor. But he is unable to present us with some of the reasons why Frank would be tempted by an extramarital affair. He can access the territory of knowing he’s not good enough to be someone special. But when we learn how Frank Wheeler’s cavalier act gets him ahead, it is not because of DiCaprio. It is because Haythe and Mendes spoon-feed it to us ad nauseum. A scene at a beach, a scene with his co-workers at a diner, a scene with April. This is an inefficient and an insulting waste of minutes. We need not be told twice, let alone three times, that Frank Wheeler has what it takes to get ahead at Knox Business Machines. It should be self-evident in the way that Frank Wheeler acts on screen. But DiCaprio here cannot merge into the tempo established by his environment.

Some of this may be bad casting and bad direction. But it’s clear watching this film that DiCaprio’s mind, emotions, and personal experience — as portrayed here — remain unsuited to a man in his midthirties who knows nothing more than a shitty job.

As April, Kate Winslet is better. She did, after all, play Sarah Pierce, the bored thirtysomething housewife who feels entitled to something better in Little Children, nailing the opportunity to fuse hauteur with vulnerability. (Perhaps Todd Field should have been the guy to write and direct Revolutionary Road.)

But her husband is not suited to direct her. Instead of crafting a performance out of Winslet, Mendes constantly places Winslet in the center of the frame, as if this visual juxtaposition will somehow atone for the bad material. 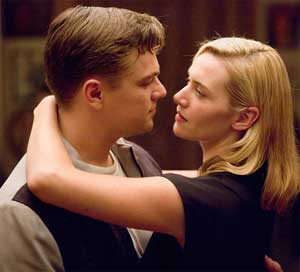 Instead, Mendes and Haythe, who appear to be a writer-director working team about as competent as Akiva Goldsman and Joel Schumacher, see Yates’s endlessly nuanced novel as an opportunity to remake American Beauty for the 1950s, with a number of sexist nods to Mad Men thrown in for commercial appeal. “I must scoot. Toodle-ooo,” says one bubbly neighbor. And this cornball emphasis suggests that Mendes and Haythe don’t see the 1950s as a time in which real people lived and wrestled with serious decision. It is a decade to be played merely for cheap laughs.

And this contempt for audiences makes Revolutionary Road a movie designed for illiterates who will likely give this dreadful film a pass because they refuse to demand better.

Perhaps Mendes and Haythe’s incompetence can be summed up in the film’s final scene, which takes a good two minutes to execute. But Yates got to the point in two sentences. It’s a pity that this film never dares to trust its audience and speed up its pace through natural beats and a meticulous attention to human behavior. If it had, it might have come close to understanding the welcome, thunderous sea of silence at the heart of Yates’s novel.