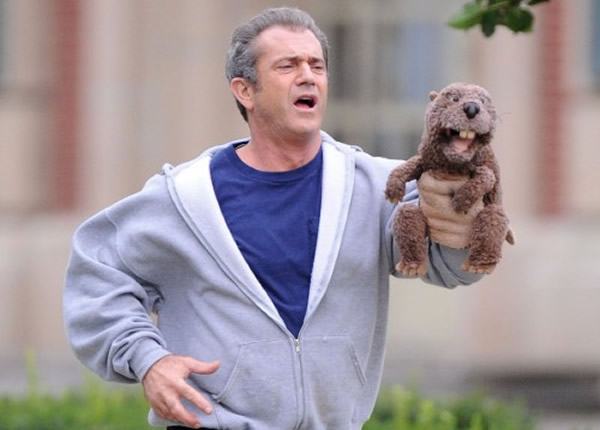 When it comes to neglected narrative subjects, there’s no better figure than the middle-aged white male with disposable income and psychological problems. At least that’s the attitude a regressive moviegoer might have had in 1976.

When it comes to neglected narrative subjects, there’s no better figure than the middle-aged white male with disposable income and psychological problems. At least that’s the attitude a regressive moviegoer might have had in 1976, the year Jodie Foster appeared on screen as two altogether different characters using their bodies for altogether different purposes: Taxi Driver’s Iris, a teenage prostitute, and Freaky Friday‘s Annabel Andrews, whose body was occupied by her mother. Thirty-five years later, Jodie Foster has now directed a film called The Beaver that takes this dysmorphic approach to drama much further.

One morning, Walter Black (Mel Gibson), a depressed man who has run his toy company into the ground, begins speaking to his workers through a hand puppet. The voice is that of an apparent beaver, somewhere between Cockney and Australian. We are told that this is experimental puppet therapy, although nobody in the film considers Googling it. (Even assuming that these people are technologically illiterate, you’d think that the human resources manager or the insurance people would at least make a few phone calls when the CEO starts disseminating a dubious card. Given the film’s lack of logic, it’s almost as if this was set in….well, 1976. Which makes the appearances of Matt Lauer and Terry Gross in this film that much weirder and that much funnier.) We hear the beaver’s voice for the first time just after Black tries to kill himself in a hotel room.

Madness appears to run in the family. Walter’s son Porter (played by the excellent Anton Yelchin) is also something of an impostor, although he doesn’t require a hand puppet to uphold his craziness. He ghost-writes high school papers so that he can save up for a cross-country road trip to find himself before attending Brown University. But Porter also has this tendency to bang his head repeatedly against the wall. In one of the film’s many heavy-handed metaphors, Porter hides the hole with a map. In another heavy-handed metaphor, we see that the Black home contains numerous leaks. Walter’s wife Meredith (played by Foster) seems to accept all this without so much as a bat of the eyelash. I presume that her neglect has something to do with the fact that she is some kind of a structural engineer for rollercoasters. But this is rather spurious logic. I have known seemingly hippie mothers irresponsible in matters beyond the family who have stopped everything to repair a decaying home or take care of their children. And they have done this with meager income. Yet The Beaver isn’t quite brave enough to pursue this blatant hypocrisy. And that’s because, when it comes to women, this odd and creepy movie is also stuck in the 1970s, adopting the Diana Trilling position in Town Bloody Hall.

Women have two choices in this film.

(1) They remain quiet nurturers waiting for the men to relinquish their positions (such as Walter Black’s Vice President, played by Cherry Jones, who agrees to Black’s crazy plans without question, much like a glorified administrative assistant). They say absolutely nothing when men do stupid and crazy and reckless things. They are even willing to give up their bodies to men as they do stupid and crazy and reckless things, as we see during a sex scene in which Walter bangs Meredith in bed and in the shower while wearing the puppet.

(2) They must wait for the right moment to express some minor and only slightly fulfilling moment of rebellion. Meredith may think that she’s a “rebel” by designing rollercoasters, but it’s worth pointing out that we only see her doing this on her own time, when Walter is away. Likewise, Norah (Jennifer Lawrence) is a student who hires Porter to write her paper. Porter discovers that she was once a graffiti artist. But Norah has seen her younger brother OD. Crippled by grief, she is denied the ability to commit a rebellious act of artistic expression. She is understandably upset when Porter pushes her into tagging a building. But it is ultimately Porter’s grief that causes Norah to become the “rebel.” But if Meredith and Norah’s acts of “rebellion” are related to patriarchal encouragement, are they really acts of rebellion? In committing “rebellion,” aren’t they in fact doing so to nurture the men?

As a man who considers himself to be modestly enlightened, I believe this false dichotomy to be an unacceptable position in the 21st century. That this narrative worldview comes with psychiatrists and psychotherapists out of the picture is also strangely suspicious, more reminiscent of a Scientologist training video or a batshit circular disseminated by Jenny McCarthy. It’s certainly something you don’t anticipate from the seemingly wise mind who directed the not bad Little Man Tate and the astutely observed Home for the Holidays.

On the other hand, The Beaver is fairly entertaining as failed art. The movie is a curious blend between Lawrence Kasdan’s greatly underrated Mumford, in which an alleged psychologist moves to a small town and becomes popular just by listening to people, and Hal Ashby’s* Being There, in which a man becomes a media sensation by simply making the rounds. When Walter becomes a hit on the talk show circuit, and a toy product involving using one’s hands to construct wood becomes momentarily popular, the film shows a brief flash of sinewy satirical muscle. Unfortunately, because the film’s philosophy is so muddled, it never quite flattens the flab.

Part of this may have something to do with the privileged feel of the movie. I realize that I’ve spent a good deal of time railing against the film’s strange anti-women slant, but I should point out that I only developed such indignation after thinking about the film for a good week and a half. Still, when I saw the movie, it didn’t feel especially dangerous to me.

Even so, The Beaver does make you feel embarrassed for Mel Gibson, who, never mind the psychotic telephone conversations, doesn’t seem to understand that his day is now over. Earlier this year, Julie Klausner and Natasha Vargas-Cooper served up one of the best explanations for why this kind of man should no longer be depicted in present cinema. Klausner noted quite rightly that, viewed within the context of 2011, Warren Beatty is “a semi-soft erection of a towering skyscraper.” It’s too bad that Klausner hasn’t seen The Beaver. To jump off from Klausner’s metaphor, Mel Gibson can’t even get it up after downing five bottles of Viagra. He’s lucky that he still has friends like Jodie Foster, who seem to have no idea that they are closet enablers.

* — I feel compelled to point out that there is a Hal Ashby retrospective playing at BAMcinématek between now and May 24th. An essay on why Hal Ashby is important and why you should see him on the big screen is forthcoming, but I’m slightly behind on film coverage, largely because I am preparing for a 32 mile walk around Manhattan’s perimeter. Because the good folks at BAM were kind enough to let me sample some of the goods, I hope that this notice will suffice in the meantime. For the moment, I hope you will take my word that this is indeed a cool thing.