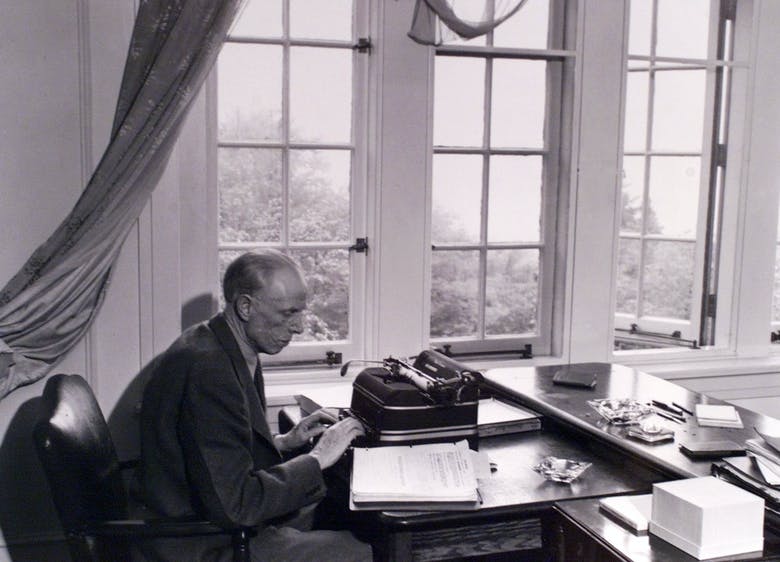 Sinclair Lewis railed against institutional trappings and landed a Nobel Prize for it. But does his work hold up more than a century later?

(This is the thirty-third entry in the The Modern Library Reading Challenge, an ambitious project to read the entire Modern Library from #100 to #1. Previous entry: The House of Mirth.)

Evelyn Waugh, Erskine Caldwell, Iris Murdoch, Nathanael West, George Orwell, Joseph Heller, James Joyce, Rebecca West. They — and so many other writers — were far nimbler in their shellacking of institutional norms than Sinclair Lewis ever was. Yet it was Lewis who won the Nobel Prize. And they didn’t. Why? Likely because the Nobel Prize Committee had it in for Edith Wharton and the Norwegian cultural oligarchs may have secretly believed they were correcting a “wrong.” Just nine years before, Lewis quietly seethed after the Pulitzer Prize Board changed its mind and awarded the Fiction Prize to Edith Wharton for The Age of Innocence instead of Main Street. It was an appropriate correction. Not only is The Age of Innocence a far superior novel to Main Street, but this was also the first Pulitzer Prize for Fiction awarded to a woman. And Edith Wharton could write Sinclair Lewis’s wino ass under the table. (Meet me in a coffeehouse and I will argue this point for hours! I am Team Wharton all the way!) We also know from Hermione Lee’s biography that Wharton, who was tremendously gracious and got along with nearly everyone, became disappointed in Lewis after he revealed himself for the self-serving drunk he truly was. She wrote to Gaillard Lapseley that Lewis was “utterly unperceiving, & frankly interested only in the sale of Arrowsmith! What a queer product — for he really is an artist, though he is so unaware of it.”

Wharton was being kind. Sheldon N. Grebstein suggested that Lewis’s clear disinterest in style is one of the reasons why he is not more widely read today. And even Grebstein, who was in the tank for Lewis, pointed out that the Minnesota bard was not exactly your goto guy when it came to unpacking the complexities of human behavior. (Main Street, in particular, fails on this front. More anon.) But Grebstein also held up this absence of eclat as a virtue, for Lewis’s primordial approach liberated him to explore chance and contrivance. And when his id was hitting the right targets, he could be just as efficiently brutal as any twentieth century writer. (Lewis’s line in Elmer Gantry about the preacher flunking Greek, but winning a ten dollar prize for “Sixteen Ways of Paying a Church Debt” is a genuinely funny one.) Perhaps this is one big reason why Gore Vidal declared Lewis a romantic.

But ultimately Sinclair Lewis’s visceral qualities are often vitiated by his limited understanding of human behavior. Jealousy is one of the cornerstones to the Sinclair Lewis formula. Martin Arrowsmith hates the starry-eyed men who fawn over his wife, as well as the success of his associates. In his 1930 Nobel lecture, Lewis was to invoke jealousy as one salient reason for American literature being poorly regarded in Europe. In his biography Rebel from Main Street, Richard R. Lingeman makes a persuasive case that Lewis’s late-life romantic relationship with Marcella Powers was cemented in jealousy. It’s certainly true that jealousy can take you far in life. Sure, you may end up looking and behaving like Emperor Palpatine near the end of your days. And you probably won’t have a sense of humor. And countless people will secretly hate you even after you achieve a modicum of fame and renown. But, by Jove, you tripled down on your reach and you got somewhere! And in Lewis’s case, it landed him a Nobel and a slot on the Modern Library list.

Lewis’s canonical “importance” has been greatly inflated because Lewis cloaked his privilege in Midwestern roots. Even those who were enlisted to stump for Lewis in his prime did so with great reluctance. (In 1961, Mark Schorer wrote a Lewis biography for the money and dreaded every minute of it.)

To my mind, Lewis’s strongest novels are Babbit, Elmer Gantry, and the underrated It Can’t Happen Here. All three of these books document the peculiarly American dangers of obsession and conformity. Read this triptych today and you feel that Lewis was writing from a place of great urgency. Read his other work and you will find slipshod prose (Lewis was an alcoholic and it has been suggested by a few scholars that he wrote most of Arrowsmith completely blotto), rambling and often incoherent narratives (particularly in his later work), and wildly inconsistent quality. To write well, Lewis needed beastly instinct and emotional angst. And when he didn’t have that, he floundered along with bloat and bitterness.

Sadly, Main Street is the only Lewis volume represented on the Modern Library list. And the unfortunate truth is that this is a vastly overesteemed, doughty, and ponderous volume — not entirely without merit — that will surely fade from public memory by the middle of the 21st century. Its attempts at Minnesota vernacular feel belabored rather than felt. (“W a’n’t it in 1979?” “Why no ‘twa’n’t.” Yeah, whole pages like that.) Yes, Carol Kennincott does try to bring culture and progressive values to a town steeped in bland vanilla values. But her calls for revolution are unpersuasive:

We want our Utopia now — and we’re going to try our hands at it. All we want is — everything for all of us! For every housewife and every longshoreman and every Hindu nationalist and every teacher. We want everything. We sha’n’t get it. So we sh’n’t ever be content —

Granted, Lewis is very good at showing how the town of Gopher Prairie subsumes Carol’s identity and erodes her standards. These uneducated Caucasian hicks — the great grandparents to today’s right-wing morons who rapturously pay attention to Tucker Carlson and other hate merchants with a bafflingly big draw when not donning their red hats and fascist paraphernalia and claiming to be victimized by critical race theory even as they espouse racism — truly believe that they are remarkable (Mrs. Ole Jenson’s “thoughts” on Shakespeare are the apotheosis of incuriosity and are truly more pitiful than a poorly sourced Wikipedia entry) and that they are “just as good as anybody in Minneapolis.” Midway through the novel, Carol and her husband actually make a trip to Minneapolis (the only place to see happening new plays and buy fashionable new threads) and we see just how residing so long in a backwards town has altered her:

She felt rustic in this once familiar city, after a year an a half of Gopher Prairie. She was certain that Kennincott was taking the wrong trolley-car. By dusk, the liquor warehouses, Hebraic clothing-shops, and lodging-houses on lower Hennepin Avenue were smoky, hideous, ill-tempered. She was battered by the noise and shuttling of the rush-hour traffic. When a clerk in an overcoat too closely fitted at the waist stared at her, she moved nearer to Kennincott’s arm. The clerk was flippant and urban. He was a superior person, used to this tumult. Was he laughing at her?

As someone who spent half his life slowly migrating his way from the colorless doldrums of the California Central Valley to the thrilling possibilities of New York City, Carol’s uncertainty and anxieties truly resonated with me. When Lewis juxtaposes Carol against the relentless judgment of Gopher Prairie, Main Street is good. Carol can’t even have a quiet moment of joy to herself without inciting the judgmental scrutiny of being a doctor’s wife. She can’t be anonymous. Her every move is written up with illiterate relish in the local newspaper. (These days, the libeling and shaming and speculation can now be found on the great hellscape of social media, where your residency in a big city or a small town no longer matters to the twisted hateful losers who condemn you for living a fun and interesting life clearly beyond their talent and initiative.)

Yet despite Lewis’s attempts to show how Carol is victimized for being a woman, the sad irony is that Carol is less of a character and more of an object. We really don’t have a strong sense of what attracts Carol to her husband Will other than his neck. (Look, I’m not going to kink-shame. But seriously? One of the interesting eccentricities about Main Street is its relentless neck imagery, applied equally to humans and horses. When Lewis preposterously described how Carol is attracted to “the last light brought out the planes of his neck, his flat ruddied cheeks, the side of his nose, the depression of his temples,” I laughed so hard on the subway that two otherwise indifferent New Yorkers shot me disapproving glances. Even accounting for the unconsummated lust that Carol is acting out in this late section of the novel, it’s abundantly clear that Lewis didn’t really understand what women are attracted to.) We are told at the start of one chapter about how Carol suddenly loves her husband Will — this mediocre scumbag who won’t even give her enough money to buy groceries — but why? Then when Carol pops out a baby, we are told that “she loved him with all the devotion and instinct at which she had scoffed.” Sinclair, buddy, put the bottle down and give us more than these superficial details!

I didn’t outright hate Main Street, but I was greatly disappointed by it. After a hundred pages of this, all the potshots at Gopher Prairie locals feel like Lewis shooting monkeys in a barrel. Sinclair Lewis either lacked the desire or the talent to portray small town people as anything other than caricatures. But three years ago, the town of Sauk Centre erected a statue to the man. And in the immediate wake of the book’s publications, many rural Minnesotans proudly called themselves “Main Streeters.” Either they missed the point of the book or, more likely, they never bothered to read it.

Next Up: Joseph Conrad’s Heart of Darkness!