Ralph Bakshi appeared on The Bat Segundo Show #214. Bakshi is the director of such films as Heavy Traffic, Coonskin, and American Pop. There is also a recent book, Unfiltered: The Complete Ralph Bakshi, now out that collects his work. 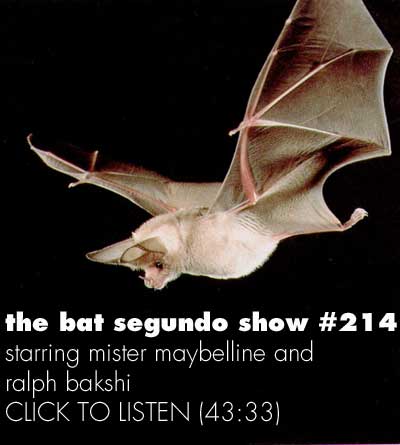 Condition of the Show: Caught in a musical daydream.

Subjects Discussed: The role of music in Bakshi’s films, making good films without a lot of money, emotionally correct songs, daydreaming, Bakshi’s record collection, the original idea of using Led Zeppelin for Lord of the Ring, Leonard Rosenman, Bakshi’s relationships with composers, Andrew Belling’s Wizards score, the “Maybelline” sequence in Heavy Traffic, artistic freedom, why Bob Seger’s “Night Moves” was the final song in American Pop, the relationship between writing fast scripts and revising in animation, the ending of Heavy Traffic, subconscious symbolism, the use of long shots and extended takes, Sergei Eisenstein, Aleksander Nevsky, giving Thomas Kinkade his first big break, on Fire and Ice not being a Bakshi film, using imagination with pre-existing visual elements, rotoscoping, getting the little artistic details, Edward Hopper, designers vs. montage, operating in the present as an artist, being honest, The Last Days of Coney Island, the impending collapse of America, Barack Obama, burning out, American avarice, and Bill Plympton.

(Lengthier excerpts from this program can be found here and here.)