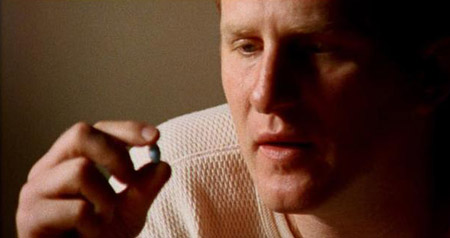 There are severe problems with Hal Haberman & Jeremy Passmore’s Special — scheduled to play on November 21st in Los Angeles and New York as the second film in Magnet Releasing’s very intriguing Six Shooter Film Series. (I have also seen Timecrimes, a very fun time travel movie from Spain that I can recommend to you. Timecrimes manages to do everything right that Special does so wrong, and I will write about it later.)

Here is a film that strives to be a partial satirical sendup of the pharmaceutical industry, but that gives us a protagonist who has little going for him other than a crush on a stuttering supermarket clerk and a loose friendship with two brothers who work at a comic book store. Here is a film ridiculing an average Joe (or, in this case, an average Les) who clings to kind acts and antidepressants to find some personal meaning, but that likewise asks us to empathize with him after he has been beaten to a pulp. Here is a film attempting to celebrate the geeky fantasy of having superpowers, but that lacks the bravery to suggest that some of our seemingly insignificant acts are less solipsistic and more meaningful than the ability to walk through walls.

Here is a case in which Les isn’t more, and he really needs to be in order for the premise to work. He’s a gushing parking enforcement officer played with too much earnestness by Michael Rapaport. We first see Les as a thrashed up man wandering in the night, with a handheld camera drifting in and out of focus. “I used to dream about flying,” says Les in the first of many voiceovers. We learn that this narration represents what he styles his medication journal. Les has signed up for a clinical trial program. (The doctor is named Dobson, which may be a nod to the evangelical Christian.) Rather suspiciously, Les is not asked to take any physical tests. The pills are handed over, and he’s asked to ingest a new phramaceutical called Specioprin Hydrochloride. Nothing happens at first. But shortly after eating a sad microwaved meal in his apartment, a mostly barren place populated by a few comic book posters hanging behind the couch, he finds himself levitating in his living room. He rushes back to the doctor to demonstrate his abilities, and it soon becomes apparent that all this is in his mind. He soon quits his job, determined to pursue a new life as a crimefighter (and to avoid the dreaded mantra, “I’m important and I keep this city running,” that his boss frequently has him utter). Aside from the power to fly and the ability to run through walls, Les also believes that he can read minds and make objects disappear.

This all sounds like a fantastic premise. And you’d think that a movie featuring a Takeshi Kitano-like scene in which Les punctures a man’s ear with chopsticks would have the spirit to pull this premise off. But the filmmakers have foolishly placed their collective faith in a high concept idea, when they really needed to pay attention to human behavior. I got the sense that Haberman and Passmore weren’t particularly interested in the way that ordinary people feel and think. And I desperately desired for someone to send them a crate of Stewart O’Nan and Richard Yates novels.

This contempt was evident when Les’s frequent tackling of potential suspects is broadcast on the evening news. The video is played over and over, as if it were a crude YouTube video or a Jackass outtake, with the Channel 3 anchor declaring, “Let’s take one more look at it.” It’s there in the hard rock music that plays as Les runs around the city in his makeshift costume. We’re expected to laugh at Les’s cluelessness. But this film takes itself seriously. And when a film wants us to care like this, it should not treat its main character like something to be pummeled in a Punch and Judy show.

The contempt is also there in the PG-rated thoughts that Les “hears” in his mind. (One man says, “Sweet juicy peach.” His girlfriend calls for peach cobbler.) Now this is an interesting choice from the filmmakers. You would think that a man who has been repeatedly tricked out of issuing parking tickets, who has indeed been called an “asshole” by a woman offering a maudlin sob story, would have a less chaste view of other people’s “thoughts.” But the filmmakers don’t want to transport us into this very interesting place. We’re expected to accept Les as nothing more than a pathetic and bumbling thirtysomething hick who got hoodwinked into the drug program because he was “happy” and he didn’t quite know his place. And with such a one-dimensional portrait, we can neither hate him nor like him, much less be interested in him. And this is simply not good enough for a narrative that wants to matter. It is also a terrible cheat to present an undeveloped character, have him periodically abuse himself by running into walls or getting mugged by thugs, and then try to ramrod the audience into sympathizing with him.

Les doesn’t get a chance to breathe, even though Rapaport does manage to sell a fight sequence in which his assailants are “invisible,” but beat him up anyway. I was reminded of the moment in Fight Club in which Edward Norton punches himself. But that moment worked, because we were damn curious about how far Norton’s character would go. What does Rapaport have react to? “You have no idea what kind of man I am, motherfucker,” followed by a flip courtesy of digitally erased wires.

There is also one glaring plot hole. If the “suits” from the drug company are after Les, and they want him to stop taking the experimental drug, why don’t they just wait for Les’s bottle of pills to run out? It is suggested multiple times in this movie that Les’s condition will continue so long as he pops the pills. But so far as we know, he only has one bottle. Certainly if the drug company wanted to leave Les out in the cold, they could simply wait it out. But instead they resort to violence. And they drive a fancy limo around town, with the men wearing bloody suits and drawing attention to themselves.

A narrative involving the tragedy of interior self-delusion is certainly a good idea for our uncertain times. But the more I think about this movie, the more I realize just how little time the filmmakers devoted to working out their story.