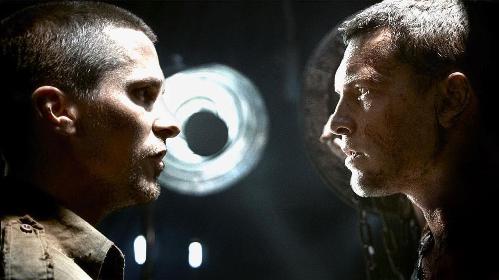 As resistance leaders go, John Connor is about as imposing as an out-of-shape hipster easily thrown out of the back door by an indolent bouncer. Christian Bale seems to think that growling all of John Connor’s lines in his Batman voice will somehow persuade audiences that he’s the savior of humanity. Alas, it only reminds us how badly The Dark Knight has aged just in the past eleven months. “If you’re listening to this,” he barks into a radio, “you are the Resistance.” Well, maybe we will be if more people lose their jobs. Because aside from the two-day coyote that Kyle Reese plops onto the dinner plate, these Judgment Day survivors aren’t altogether different from the bums on Venice Beach. And call me crazy, but you’re probably going to be dirty and more than a tad dispirited if you survive a nuclear apocalypse. Chances are that if Skynet is sending around HKs and scouts, and even some little mechanical critters in the water (an homage to Star Wars‘s trash compactor scene?), this evil empire is probably going to have the technology to intercept radio signals. It is, after all, self-aware. So why on earth is Michael Ironside barking his orders to invade Skynet over the air?

Terminator Salvation lacks the grit and the grace of the original, much less the pace and the pitch of the second film or even the idiotic fun of the third. It’s easily the worst installment of the series, although I enjoyed it more than the crappy Star Trek reboot. Which is to say I enjoyed the giant robot blowing apart a disheveled 7-11 (I guess he didn’t get his Slurpee, but I’m sure the producers will collect from the product placement) and Anton Yelchin brilliantly mimicking Michael Biehn as Kyle Reese, but somehow making the role his own. (A few words on Yelchin: He’s great. The kid will go places. Between Reese and Chekhov, he’s demonstrated that he’s that rare eccentric character actor who somehow sparkles even in dumb Hollywood blockbusters. Let us hope that the system will not corrupt him into a far less interesting talent.)

But I couldn’t care less about John Connor. You figure that he’d get some voiceover tips from listening to all those tapes of his mother (played by Linda Hamilton’s voice). But John Connor is so bland that I think his hopes of getting into the iTunes Top 100 Podcasts are slim at best, even if Skynet manages to kill all the podcasters. Bale was more interesting earlier in the year when an audio clip surfaced of Bale freaking out on set. In fact, I was hoping for a whole film featuring a psychotic Christian Bale scaring the hell out of his lieutenants. Instead, I observed a paucity of masculinity. We’re seeing less swagger in our action movies, and I’m starting to get concerned. (As it so happens, Ah-nuld makes a cameo appearance. He’s a nude and voiceless CG version with that silly swept hair from the first film. I kind of missed that silly swept hair. It seemed just right on a coldblooded killing machine. But rather conspicuously, Arnold’s penis is either missing on this T-800 model or permanently darkened by the odd lighting. This cannot be an accident.)

What does it say that I actually longed for a preteen Edward Furlong? With Bale’s Connor, we don’t even get the silly emo nonsense we got from Nick Stahl in the last film. Even Bale’s pathetic attempt to bark the trademark line “I’ll be back” was responded to with ridicule from the audience. Besides, a Terminator movie without Ah-nuld at the helm feels like a trip to Cabo San Lucas without tequila. You want to string up the travel agents who wasted your time.

The agents in question — represented by a team of screenwriters, some of whom were rewriting on the set and rewriting very close to the start of production — have attempted to atone for the lack of time travel by giving us a guy named Marcus (played by Sam Worthington) who signs on to be Helena Bonham Carter’s robotic bitch. Cyberdyne — not blown up, despite the second film’s events — has apparently transformed into a genetics company. And if you’re thinking that Harold Arlen songs are in Worthington’s future, you’re right and McG will probably send you a kewpie doll. Worthington isn’t a bad actor, but his character and motivations are utterly ridiculous. (Let’s put it this way. Ah-nuld’s silly line, “I know now why you cry, but it is something I can never do,” has more heft than the entirety of Marcus’s actions.) You mean to tell me that some random guy wandering around a Los Angeles wasteland and not knowing about Skynet for ten years is going to be immediately accepted by the survivors of humanity? And not even Paul Haggis, the Oscar-winning screenwriter, objected in the rewrites? With Marcus, we got silly Christ imagery when he’s executed in prison and silly Christ imagery when he’s strung up above a pit. Christ imagery may have salvaged David Fincher’s murky Alien 3, but it’s clear that McG is not good enough to follow in the mighty James Cameron’s footsteps. (Indeed, the film ends with Christian Bale wandering around a set very similar to the steely outpost at the end of Aliens. Whether this was a conscious nod to Cameron or not, Bale is so utterly inept and uninteresting that one longs for Sigourney Weaver to beat the shit out of Bale and lead humanity out of the doldrums. You know that she’d do it too. And she wouldn’t even have to use a funny Batman voice.)

To add insult to injury, the filmmakers have pissed away James Cameron’s odd but effective feminist subtext. The women of Cameron’s Terminator movies have always been extremely interesting, caught within an odd melange of libertarian and Third Wave sentiments. They are gutsy, feminine, strong, vulnerable, but also quite capable of going nuts. And they’re far more interesting than any of the men. When Josh Friedman signed on to do The Sarah Connor Chronicles (a rare intelligent program that has been sadly given the axe), he knew damn well that gender roles were one of the franchise’s secret ingredients. (The second season premiere ends with Garbage singer Shirley Manson — playing a T-1000 model — morphing from a urinal to her female form in the men’s room to settle a bit of corporate patriarchy. This moment represented what was quite possibly the most intriguing symbol of gender relations we’re likely to see in a television series in quite some time.)

But in Terminator Salvation, McG and his boys have given us three archetypes for women to choose from (discounting Helena Bonham Carter and former NEA director Jane Alexander, who surely must have needed the money to show up for such a thankless role): (1) John Connor’s wife, Kate, who is barefoot and pregnant and supportive, (2) Blair Williams, a boring by-the-numbers rebel who asks to snuggle up to Marcus for some body heat, and (3) Star, a mute girl, reminiscent of the feral boy from The Road Warrior, who is resourceful but not permitted to speak. It’s safe to say that, even accounting for Judgment Day throwing everything into whack, this doesn’t exactly consider 21st century developments. I understand that women can do far more than breed and kick ass.

For all the screenwriters paid for this silly movie, you think they’d come up with better lines than “That’s why I don’t trust you. I’m the only hope you have.” James Cameron’s dialogue has sometimes been silly, but at least the man knew how to make a goddam movie. At one point, Christian Bale shouts, “We aren’t machines. If we behave like them, then what is the point of winning?”

Which led me to wonder what the point was in watching this damn movie. I loved the Terminator movies growing up. I’m proud to say that they still held up last week. (If anything, the first film was even better than I remember. And I had seen it perhaps thirty times during my adolescence. Too bad that Ah-nuld went all soft.) I’m also proud to say that Josh Friedman has created a decent and thoughtful television spinoff. (It’s also worth observing that Friedman pretty much ignored the third movie.) For the powers that be to preempt Friedman’s efforts while advancing McG’s callow hucksterism is a sign that the machines have indeed won. The storm at the end of the first film came and went. It’s time to move on and ignore the Terminator franchise. There’s no fate but what we make for ourselves. And that includes avoiding bullshit blockbusters.