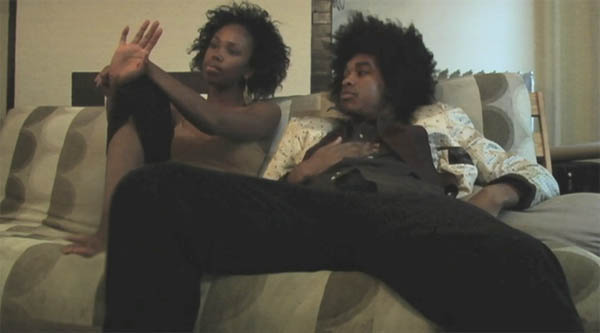 This 1,400 word essay on Terence Nance’s intriguing personal documentary compares it to The Americanization of Emily and unwittingly mimics Terence Nance’s structural form in its consideration.

[This is the second in a series of dispatches relating to the New Directors/New Films series, running between March 21, 2012 and April 1, 2011 at MOMA and the Film Society of Lincoln Center.]

Vol 01 — Slightly Eccentric Lede Intended to Mimic the Film’s Structure, Offering a Knowing Nod or a Tedious Longueur Depending Upon What You Prefer

You’re not supposed to begin an essay with a digression, but since the film I’m about to write about is a deceptive concatenation of digressions, it somehow seems appropriate to break the unspoken rule.

Upon seeing “ambivalence” misspelled on-screen during An Oversimplification of Her Beauty, the wordsmith in me wondered if this may have been deliberate. After all, filmmaker Terence Nance does have the woman of his real-life and cinematic affections read what appears to be a lengthy (though modified — but I am trusting my memory and I am not Googling it, so I could be wrong) passage from Louise Erdrich’s The Bingo Palace. And Nance’s film is fascinatingly verbal, with words displayed and heard at nearly every point: filling in every stray gap (thanks in large part to Reg E. Cathey’s smooth narration, which intersperses at times with Nance’s — the effect works, the competitive voices suggesting some internal dialogue between a boy and a man, but I wondered at times if the actor from The Wire had to stick to a mere 80% of the film’s narration, rather than the full order, in order to fit his great velvet-voiced services into the low budget), complicating and reviving and reforming and mimicking a long-dead relationship that is also the very subject of this film. So why would Nance misspell the very word that may signal his true and present feelings about what he’s documenting?

It was at this point — perhaps an hour into the movie — that my mind suggested that Oversimplification could be a clever reply to The Americanization of Emily. In the 1964 film (written by Paddy Chayefsky, based on a William Bradford Huie novel; I won’t mention the director because it runs the risk of another 500 words I don’t really want to write right now), Emily is both attracted and repelled by a soldier’s lifestyle. She’s lost many of the men she’s loved during the war and she doesn’t want to see this new guy she’s fallen for, Madison, die either. And then it appears that Madison is dead — the first man to make it on Omaha Beach. And Emily is crushed. But Madison is not dead. He’s living it up as a hero, which is something of an understatement. Because he was actually a coward. Emily says that he should accept his role.

Now let’s take a look at Nance’s film. We are informed that Nance is a young twentysomething who has had a family upbringing without injury or incident (described as “the Cosby effect”). He works twelve hour days, but most of his money appears to be going into his rent and his Metrocard. He has to construct his own bed, relying on Japanese joinery, carrying slabs on the subway, and not getting the bed right because he is not the greatest carpenter and he has used pine instead of sturdier wood. It can be argued that this is a lifestyle: certainly many of today’s artists soldier on in an American climate increasingly hostile to art. And Nance’s choice of inferior wood may indeed suggests that he is beguilingly clueless in some sense. This was the big tip-off for me, in any case, that Nance’s heavily verbal, multitiered film was just as much of an imperfect bed that he would have to lay in for some years.

So Nance meets Namik. The details are imprecise, even as there is the illusion of precision contained within the film’s ongoing narration and structure. (At one point, we are helpfully informed that one section of the film is “up to date as of 2006.”) They sleep together, but they don’t necessarily make love. The nature of the relationship is imprecise, as befitting two confused but amicable young people in some kind of love or lust. It is imprecise even as Nance offers a timeline of events late into the film. We learn that another man has asked Namik to be in an exclusive relationship, which means the end of her involvement with Nance.

Or so we think. Because Nance, crushed by this, decides to dwell on the relationship anyway — even after it is over. He somehow persuades Namik to respond to a letter that he sent her long after the fact and records her response on camera. What starts off as a young man’s friendly and humble self-examination becomes a little creepy for a time. I mean, can you imagine asking some person you slept with several years ago to respond to something on camera for a project that reflects your own personal truth? Especially after both of you have moved on? That Namik does all this without filing for a restraining order speaks to Nance’s strange charm. Or maybe it’s the key ingredient for this film’s weirdly appealing conceptual thrust. In an age of increasing documentation of the self, are we meant to carry on chronicling the very emotions that might be harmful towards us or others? Especially when we’re ushered to shift our Facebook profiles onto a timeline and relive our worst moments? Nance seems game for endless self-examination. He didn’t come off as a narcissist to me, although, given the walkouts I observed, I know his willingness to push into his own seemingly common complexities won’t be for everyone.

Vol 04 — An Attempt to Find a Conclusion

Like Nance, I seem to have drifted in the immediate emotional residue and haven’t even consulted the many notes I took. Many of them are indecipherable. But I’m sure that many of them are readable and profound. I have opted for memory instead. Yet in considering my feelings (which are genuinely positive) for Nance’s film, it’s interesting that I haven’t mentioned the animation. And this isn’t fair. Because there is one past fling which Nance chronicles quite well through animation, where all parties are naked and Nance’s stature waxes and wanes as the giant woman he is describing transforms into a ripe tomato as she gets it on with another lover and Nance begins to comprehend the great pain of trying to stay platonic with a woman you still have feelings for.

This film is Nance’s truth, and nothing but Nance’s truth. Even as Nance includes a trailer for Naink’s possible cinematic response, and even as Nance includes a hazy video clip from a Q&A session just after an early version of the film played a theater, this is still Nance’s truth. It’s worth pointing out that Oversimplification emerged from the bones of an earlier short film called How Would You Feel?. That both films are, in turn, evolved from Nance’s real-life experience leads one to wonder where the original emotional kernel can be found, or whether it’s even worth pursuing.

Nance hasn’t so much oversimplified Namik’s beauty, as he has complicated it into a distorted view that no longer bears any resemblance to the original lived moment. And while another older person (especially one with several failed marriages) might find this annoying or horrifying, I found this oddly enthralling. Nance confesses that he doesn’t really possess the emotional memory of his moments with Namik, and that her motion in the clips edited on his laptop somehow actuated these false highlights. Does technology debilitate the romance or the inherent truth of our memories? Probably. And I think, given the defiant iPhone-centric manner in which he ends his movie, Nance does too. Yet here is a man who, not long after showing a version of his film to Namik, puts the microphone in her face and presses her on how she feels, curling it around her (while sitting behind her) like an arm. I’ll be hard-pressed to find a better epitomization of 21st century life (especially among those who document it) in any film I see this year.

Is this thing on?