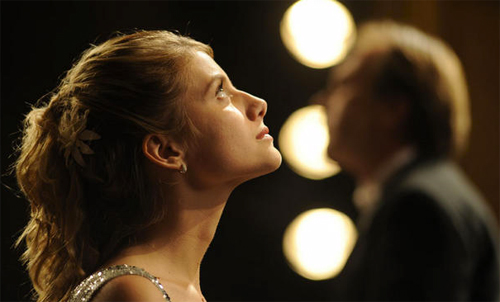 A film coming from France and Russia shouldn’t feel like some thoughtless bibelot churned from a Hollywood machine. Find out some of the reasons why in this review of an Eran Kolirin clone.

Here are some of the reasons why The Concert does not work:

1. Eran Kolirin’s The Band’s Visit — a highly charming movie in which an Egyptian police band accidentally goes to the wrong town and learns quite a bit about existing along the way — hangs in recent memory. There is little doubt in my mind that The Concert was acquired by The Weinstein Company or set into motion by its motley group of multinational financiers with this association. But its premise — a ragtag Russian group of musicians impersonates the Bolshoi Orchestra to play in Paris — is problematic.

2. The premise is problematic because it asks us to suspend our disbelief again, and again, and again. This causes us to resist the movie. We’re expected to believe that, because one fax has been intercepted, a fax that wouldn’t be followed up with an email, a phone call, or any other attempt to verify provenance, the ersatz Bolshoi commanded by our hero would happen. We’re expected to believe that the Théâtre du Châtelet, a long-standing house that premiered Stravinsky’s Petrouchka and is home to the Kirov Opera, would throw around a good deal of money without, say, consulting the Bolshoi’s website to ensure that these people are who they say they are. We’re expected to believe that these impostors can get away with their scheme when a Russian TV crew is chronicling them, and it is quite likely that friends and loved ones of the true Bolshoi would proffer hysteria and consternation when seeing the con unfold. We’re expected to believe that an entire symphony, nearly all of them out of practice, will somehow get its act together. And we’re expected to believe that, in a post-9/11 age, not a single fabricated passport, nearly all obtained at the eleventh hour, would be scrutinized by a single authority. And obviously, since a world-class orchestra is attending press, there are likely to be journalists or bloggers who are going to be checking into the Bolshoi performers. (Then again, what if nobody cared about the Bolshoi Orchestra in Paris? What if the reason why this phony orchestra passed for the real thing was because classical music had become less valued? Even in a metropolis priding itself on culture! Suddenly, there’s a more legitimate tension here over whether or not the impostors will be discovered or even appreciated!)

3. In short, scenarist and director Radu Mihaileanu hasn’t thought these basic questions through. Strangely, Matthew Robbins, the screenwriter who wrote such campy movies as Corvette Summer, Warning Sign, and The Legend of Billie Jean, is credited as one of the collaborators. “Collaborator,” in this case, is rightly associated with the connotation I derived from Isser Woloch’s Napoleon and his Collaborators: The Making of a Dictatorship. What we have here is an illogical mess that will frustrate any thinking audience member. Never mind that Aleksei Guskow is actually quite good as the disgraced former conductor of the Bolshoi Orchestra toiling decades later in the Bolshoi as a janitor and who sees the ruse as a way of restoring his reputation. The points I’ve raised in the previous paragraph work against story logic. Furthermore, the secret daughter plot introduced deep in the film’s second act disastrously detracts from the redemption narrative.

4. Look, I get that the movie wants to be the 21st century answer to Ernst Lubitsch through a Russian prism. (The Concert immediately reminded me of the much superior Ninotchka, and I grew antsier as the film progressed.) But Lubitsch (and Billy Wilder, one of Ninotchka‘s co-writers) understood that when you’re creating fantastical elegance of a somewhat implausible ilk, it needs to be buttressed by such ideas as a champagne pop being confused with a gunshot or funny lines like “The last mass trials were a great success. There are going to be fewer but better Russians.” And while there’s a certain amusement in seeing the fates of several symphony members (a few elderly musicians are now providing the orgasmic soundtrack of a porn movie), as well as a gypsy musician prove himself before edified musicians, The Concert doesn’t have what it takes to invite us into its deception. Furthermore, in explaining the plot, it relies upon an obnoxious strobe effect for belabored flashbacks. And in these flashbacks, the film hasn’t even bothered to make its fifty-year-old composer look or feel like a man in his early twenties.

5. I forgot to mention one of the film’s subplots involving a man attempting to revitalize the Communist Party with a speech delivered on the night of the Bolshoi performance. This story angle is neither funny nor interesting. A long-winded speech, check. A reduced audience, check. Flags and uniforms rescued from the mothballs, check. What’s lost within all these cliches is the true cost of attempting to recapture a past identity. The film’s ultimate failure comes with its diffidence to confront genuine human emotions, save through a work camp flashback that comes near the end, which feels appended by some slick marketing type wanting to ensure that “all the elements are in place” for mass consumption. A film coming from France and Russia shouldn’t feel like some thoughtless bibelot churned from a Hollywood machine.