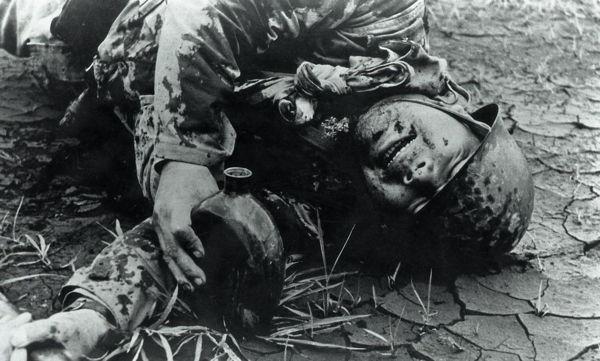 Approximately 72% of this 1939 film involves marching. I am not quite certain that this makes for compelling narrative.

[This is the third in a series of dispatches relating to the 2011 New York Film Festival. All of Reluctant Habits’s NYFF posts can be located here.]

After a shell from a grenade launcher lands squarely on the roof of an enemy-held farmhouse, two close-ups show soldiers grinning in satisfaction. In general, however, the emotions of the soldiers are repressed. They seem struck dumb by the incomprehensible grandeur of the war and the machinelike organization of which they are a part. — Peter B. High, The Imperial Screen

This is the statement of a reaching critic. There were many critics reaching (the honest ones were yawning) during a Friday afternoon screening of Mud and Soldiers — a 1939 film depicting the Second Sino-Japanese War that is playing the New York Film Festival as part of a Nikkatsu celebration. I saw many trying to cogitate in the vestibule, waiting to “form” their opinions shortly after others opened their mouths. Many were exhausted. They had just gone through vicarious war.

So let me be the first to fire a forthright salvo: Mud and Soldiers, despite Mr. High’s interpretation, isn’t as good as Paths of Glory or All Quiet on the Western Front or The Hurt Locker or Saving Private Whitey. It does indeed feature soldiers doing their duty, not reacting much to all the billowing smoke that they have caused through rampant bursts of artillery. One curious quality about Mud and Soldiers is the way that it avoids explicit bloodshed. A soldier gets shot in the thigh, but we do not see the actual act. As someone who lusts for this type of cinematic act, I was a little disappointed. Soldiers fire upon enemies, but we see very few of them. Presumably, because this was made in 1939, there was a shortage on extras and squibs. There was surely no shortage on propaganda. The film does, after all, rely on newsreel footage.

There is a banal and repetitive quality to the soldiers’s banter. And this pabulum stretches into the soldiers’s actions. Director Tomotaka Tasaka is certainly committed to showing how mind-numbingly dull war can be. And yet this 21st century viewer longed for something more. Why exactly?

The film even contains compelling dialogue in which two soldiers discuss their marching progress:

While there’s a good argument somewhere about how much soldiers march in war, and art’s duty to reflect this reality, marching alone does not necessarily make for a compelling narrative — especially when the sound effects guy is using the same CLOMP CLOMP CLOMP for all filmed marching and director Tomotaka Tasaka hasn’t thought to actually synch up his men’s feet to the CLOMPing.

Now I am a fairly devoted long distance walker (I walked the eight miles back to Brooklyn after seeing this movie, although I should report that I decided upon this in advance of the screening), but Mud and Soldiers bored the hell out of me. In fact, Mud and Soldiers is probably one of the most tedious war movies I have had the misfortune to sit through. It is difficult to fathom a defense of this film, but I am informed that the film — based on Hino Ashihei’s bestseller — made a great impact on the Japanese public, as films devoted to marching and a mechanical lack of emotion made under a state governed by belligerent admirals are known to do. I am also informed that Tasaka was a victim of the Hiroshima bombing and continued to direct many features over the next two decades. I certainly hope that these post-Hiroshima films do not contain nearly as much marching.