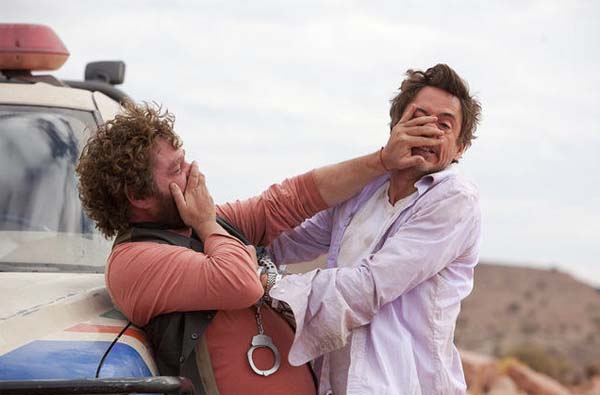 A comedy featuring a masturbating dog certainly hits the right stroke. Thankfully, there are capable hands behind Due Date, a gutsy and often side-splitting movie that further cements Todd Phillips’s rep as a comedy auteur far more interesting than Adam McKay and Nicholas Stoller. Like those two directors, Phillips often relies on stock situations – predominantly featuring men – to propel his unapologetically adolescent anarchy. Men in early middle age start a fraternity in Old School. Four men celebrating a bachelor party in Vegas can’t remember what happened the night before in The Hangover. And in Road Trip, The Hangover, and Due Date, it often takes a long drive to work out these lingering issues of rootlesness.

Despite all this late stage wandering, one detects a grown-up somewhere within Phillips. With his two most recent films, Phillips seems to be working the territory somewhere between Terry Zwigoff’s hilariously bleak assaults on the American climate and Seth MacFarlane’s free association. In The Hangover, Mike Tyson (playing Mike Tyson) factors into the plot. We see Carrot Top and Wayne Newton in the closing credits slideshow. In Due Date, the sitcom Two and a Half Men becomes a part of the story.* RZA turns up as a TSA man. .

Given such attention to the real and the imaginary, Slavoj Zizek could very well host a Lacanian kegger after taking in the Phillips oeuvre. (It’s worth pointing out that Phillips cut his teeth with the controversial documentary, Frat House, in which Phillips and co-director Andrew Gurland faced allegations that they paid fraternity members and staged several scenes.) But if Phillips’s films were only about this (and, more importantly, if his films weren’t flat out funny), they probably wouldn’t be worth considering. Any Family Guy viewer knows damn well that a promising installment often flounders when MacFalane’s writers rely too much on reference.

But Phillips has Zach Galifianakis’s Belushi-like presence to counterbalance all this. I enjoyed Galifianakis’s raucous mania in The Hangover, but felt that he had exhausted his possibilities in the HBO series, Bored to Death. It turns out that I was mistaken. Jonathan Ames’s lazy and ungenerous writing, which fails to view Galifianakis as anything more than a fat guy foil for Jason Schwartzman, was largely to blame. In Due Date, Galifianakis bustles as brightly as he did in The Hangover. The man has the talent to turn a physical gag on a plane with his belly into something that somehow makes us less aware of his physicality and more intrigued by his character. (Chris Farley was one of the few portly comic actors to do this as well: most notably in his famous Chippendale’s sketch with Patrick Swayze on Saturday Night Live.) As aspiring actor Ethan Tremblay, Galifianakis knows how to deliver his lines so that the audience is constantly recalibrating its estimation of Tremblay’s intelligence. (And in light of the film’s observations about underestimating people, and a nation that relies too much on swift judgment, this performance helps steer the film in the right direction.)

There’s a scene in which Galifianakis’s character is asked to perform material within a public restroom, so that he can prove to the disbelieving Downey that he’s a bona-fide actor. Tremblay delivers an unexpectedly poignant performance, using the edge of a bathroom stall as a wall. And this moment works on several interesting levels: (1) Todd Phillips is communicating to his audience that Galifianakis is more than just a funny fat man, (2) Ethan Tremblay is communicating to his snobbish white-collar traveling companion that he has some serious chops, (3) Ethan Tremblay is being asked to give it his all in a public restroom, quite possibly the most ignoble venue to prove himself (and the one you are least likely to see chronicled in the newspapers), and (4) the savvy symmetry between (1) and (2) gives Phillips some leverage to continue his exploration of the real and the fictional.

That all this is going on, while Phillips is presenting his populist audience with a genuine emotional moment, suggests very highly that the director who once gave us Starsky & Hutch has more moves than any half-literate moviegoer could have anticipated six years ago. How’s that for underestimation?

John Hughes’s Planes, Trains, and Automobiles serves as Due Date‘s obvious template. Yes, Phillips and his writers have taken the blue collar/white collar framework of Planes, updating the film to reflect a post-9/11 America. Yes, they have taken an actor known in part for his wackiness (here, Robert Downey, Jr., previously, Steve Martin) and made him grumpy and straitlaced. Yes, they’ve even taken whole lines from Hughes (“I have a winning personality”) and converted them over.

But Phillips has also paid close attention to what Hughes did so well visually in the motel room scenes: the blue colors for John Candy, the white colors for Steve Martin. In one notable moment from Planes, we see Martin grabbing a blue blanket covering Candy and putting it over his frame, a nice visual suggestion of class integration in a motel room bed (like the restroom moment in Due Date, also evocative of the dignity discovered within “low” environments).

Twenty-three years after Planes Trains, and Automobiles, the income disparity between the rich and the poor has worsened. So in Due Date, our white-collar protagonist now wears a purple shirt, as if his white collar had become somehow stained by blue-collar contact. (It is also interesting that, when Downey’s character breaks his arm, his cast is blue.) Meanwhile, the Tremblay character wears blue jeans (2010’s answer to Candy’s blue collar pajamas?) and a red shirt (post-Dubya assumption about red staters). Additionally, the pregnant white-collar wife stuck at home wears a pristine white sweater, bearing faint blue stripes. Is she imprisoned by class? Or is she besmirched by it? And what does it say that Downey’s character suspects a black man of having an affair with her? Might he be just as capable as Tremblay of rallying with an OBAMA = SOCIALIST sign? What does it say that Tremblay lets a “zebra baby” epithet slip from his lips that is entirely accidental? If our language and our actions remain under constant scrutiny, how then can we learn from our mistakes?

It’s a lesson that both sides can profit from. Because class lines are more ruthless than they were in 1987. In Due Date, the the yuppie is much meaner. At one point, Robert Downey’s architect character, Peter Highman, clips a kid in the stomach to get him to stop harassing him. Is this brutal solution a harbinger of fatherhood to come? (Or violent liberals to come?) Meanwhile, Ethan Tremblay commits far more destruction than John Candy’s Del Griffith. Forget Michael McKean’s cop. Phillips ups the stakes and brings in the border patrol. Minutes into the movie, Tremblay manages to get Highman on a no fly list. These skirmishes against authority make Due Date a more political film (think gleeful anarchism) than Planes, Trains, and Automobiles. But like Zwigoff’s movies, Due Date skillfully uses politically incorrect humor to defuse any hypothetical political agenda and thus make these considerations more palatable to the common man, which is very much where Due Date‘s heart is. And rightfully so. The reason why this movie works so well is because our fragmentation is more common than most of us are willing to accept.

* The use of Two and a Half Men is suspiciously well-timed, leading one to imagine an iniquitous PR flack, happily trading in misfortune for money, encouraging Charlie Sheen to engage in more headline-grabbing behavior right before the film’s release.