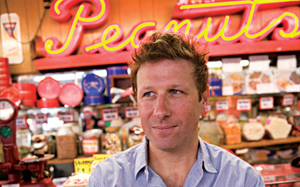 Adam Ross recently appeared on The Bat Segundo Show #349. Mr. Ross is most recently the author of Mr. Peanut.

Condition of Mr. Segundo: Caught within the vertiginous sensation of a Mobius strip. 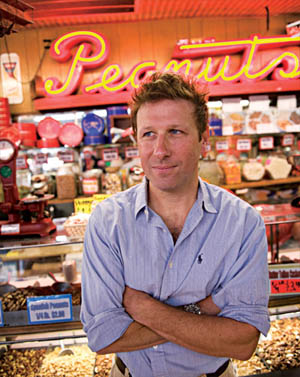 Ross: I think that what keeps us going day in and day out as we live our lives — and certainly we live our lives, hopefully, as members of caring relationships — is the belief that we can improve and change. And when I think of the idea of change, progress, and the improvability of character, that to me is a belief that character is somewhat linear. Right? That, okay, I learned that lesson back then. I’m never going to do it again. And yet my experience as a guy who’s been successfully married for fifteen years is that the experience of living with someone you care about a great deal for a long period of time is to come up against the reef of circularity, but also to enjoy the bliss of recurrence, right? So it’s paradoxical. There are these competing desires. The closed circles that Mr. Peanut presents. The entrapment, which is the same experience, I think, of looking at Escher. Which is that weird — you look at the art object from the outside. But if you really enter an Escher, you have this perceptual experience, where it’s inescapable and then you have to step back. It’s to me kind of analogous to the experience we often feel with those closest to us. Whether it’s brothers/sisters, mothers/fathers, or husbands/wives, we want to believe that we could get past X. But we often don’t. And that, to me, is the heaven and hell of marriage.

Correspondent: Yeah. So what you are suggesting here….

Ross: Yes. Well, let’s — because there’s nothing better to me as the writer than having this kind of a conversation. Because you’re putting your finger exactly onto me. What I was trying to examine. And so the first question I would say, in terms of decoding some aspects of Mr. Peanut is this. When is David writing this? Because essentially the book hints that there is a period of him being terribly blocked. And then there is a period where he is liberated to close the circle. Close the Mobius band, right? At the same time, it is, to me, powerful works of art — a movie that comes to mind just off the top of my head is either something like Nicolas Roeg’s Don’t Look Now or the great movie, Francis with Jessica Lange — where the effect of the work is to shock you and stun you. Another book like this would be John Hawkes’s The Lime Twig. Where the power of the nightmare is forceful enough that you emerge from it not just still reeling from the things you’ve seen, but also hopefully more awake to what’s right in front of you in the real. And so the question is: Is the virtual a prophylactic from life? Or does it have this possible saving power? Does a reader — who I bring in and as you say look from the outside in at all these moments that are fraught with conflict and violence and moments of joy and missed opportunities — is the reader there more awake to his or her life? Or, to the reader, is it just another entertainment? Is it just another enchantment? I don’t have the answer to that. My hope would be that it’s a wake-up call. But my experience is that these wake-up calls — we’re on the band also. We’re constantly forgetting. Does that make sense?

Correspondent: No, it totally does. And actually I want to lay out just a sampling of the numerous Hitchcock references in this book to jump off of this point.

Correspondent: You have, for example, Nurse Ritter referencing Thelma Ritter in Rear Window. David encounters business cards made out to Dr. Fred Richmond from Psycho, Dr. Alex Brulov from Spellbound, which is also the name of his software company. Jesslyn Fax is a co-worker of Alice’s, but also the actress who played Miss Hearing Aid in Rear Window.

Correspondent: And so on. So I’m wondering, based off of your last answer, whether there was a specific science in these particular references. Or whether they were all pure MacGuffins. Pure ways of detracting the reader, of inviting the reader to look in at something — again, going back to the question of semiotics — that is either complete bullshit. Or whether there is any kind of remote justification. Or whether it was just you having fun. Again, it works on this level of “Here, reader, look from the outside. But if you peer in, you will find nothing.”

Ross: I’ve been watching Hitchcock films intensively for twenty years. And it would be pure postmodern kitsch — pure postmodern trash — if those references didn’t have, as it were — that they didn’t rhyme thematically. In fact, there is, throughout the novel, a semiotics of naming which you’ve already put your finger on. And with some of the names you’ve already brought up for instance. Ward Hastroll is an anagram for Lars Thorwald [Raymond Burr’s character from Rear Window]. It’s the Hastroll section in terms of the way names are used. And not just names. They’re the Escher obverse of Rear Window. So, for instance, and I’ll only give a few of these away, but to give you an idea that there is method to the madness, I mean, the newlyweds that Ward Hastroll interviews are named the same actors in Rear Window.

Ross: And if you go through, it actually in some ways — for instance, in that case — it modernizes the conflict that the couple has in Rear Window. Ross Bagdasarian is the name of the piano player in Rear Window. And his wife — that’s Judith, he says — is the woman who’s also named Miss Lonelyhearts. And so they clearly — in that one quick cameo that Ross Bagdasarian has — they clearly had a happy life. But now their life is fading from memory because of his Alzheimer’s. So there’s that. There is the superstructure. But more importantly, in the Sheppard section — and I wouldn’t want to give too much of this away, because I’m waiting for people like yourself to start really dealing with it. The Sheppard section is comprised both in terms of content and certain kinds of rhyming themes of multiple Hitchcock narratives. Vertigo plays an enormous part, both in terms of content and thematically in the Sheppard section. Shadow of a Doubt. Strangers on a Train. Marnie. Rear Window. To name but a few. Spellbound, as you said, does reemerge. I could go on. North by Northwest. Which also has its very clear semiotics of the kind of spy action caper. Because I think Hitchcock, at the time, was very tired of the action caper MacGuffin and wanted to introduce an element of absurdity. So, for instance, Cary Grant’s wallet in North by Northwest — this teeny little wallet — never empties of money. And he’s constantly doling out cash throughout the whole film. Little tricks like that. A Hitchcock scholar will start to enter that labyrinth and will start to see a way in which these themes — even on the level of mise en scene. I mean, if you look at the way certain characters are dressed in the Sheppard section, and where they go to buy clothes, it is not just using Hitchcock locales and settings.