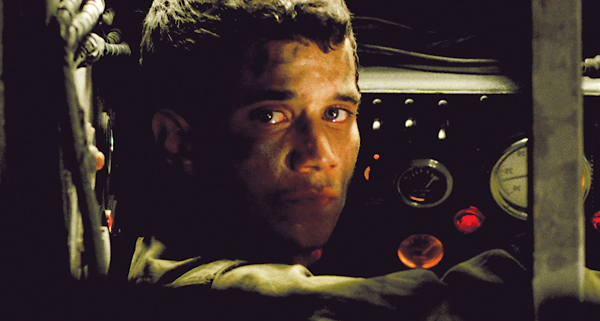 Back in March, The New York Times published a Michael Kamber essay in which Kamber took The Hurt Locker to task for its “realistic depiction.” While the film went on to garner numerous awards, including the Best Picture Oscar, its apparent inaccuracies were enough to unsettle Kamber and others who had served in combat. Despite The Hurt Locker feeling “realistic” to those who had never set foot into a war zone, the film was a sham for Baghdad vets.

The criticisms against The Hurt Locker are hardly a new development for the war movie. Full Metal Jacket, Flags of Our Fathers, Michael Bay’s Pearl Harbor (no surprise), We Were Soldiers, Glory, 300, and Apocalypse Now — just to name a few — have all been saddled with the “inaccurate” charge, leaving one to wonder the war movie’s purpose. Just how accurate does the narrative experience have to be? We accept the subjective nature of a documentary. Why can’t we do so in a cinematic narrative?

It’s possible that Lebanon, which is photographed primarily from a tank’s viewpoint, works as well as it does primarily because it has the audacity to be subjective from the get-go. Aside from an image of flowers that bookends the film’s beginning and end, Lebanon remains quite resolutely within the interior. I have no idea how accurate writer-director Samuel Maoz’s film is in relation to the 1982 Lebanon War, and I don’t very much care. What matters here most is that Maoz has established a horrific simulacrum from personal combat experience. We feel as confined as he once did. His frequent shots of dripping black fluid, the terrible blur of dead bodies thrown into the interior with cold alacrity, the squeals of men being chained up and tortured in multiple languages, and the tank’s terrifying whines as it attempts to tread across a battlefield while both severely damaged and under attack unsettled my senses. But then I have never served in combat. Is Lebanon meant for people like me? Or must I recuse myself from the question of accuracy because of my inexperience? If so, I would happily join the company of Stephen Crane, who wrote The Red Badge of Courage despite never having observed a battle.

Whether one insists upon accuracy or not, Samuel Maoz’s movie has rather bravely taken on the same perspective that we’re used to “seeing” or “perceiving” a military environment from a first-person shooter’s detached comfort zone. Iis the video game’s detached alternative more faithful or “accurate” to the combat experience? If you’ve ever played Call of Duty or Day of Defeat: Source online, you’ll inevitably encounter a server populated by former or active servicemen. One rarely hears these men complaining about the “accuracy” of a first-person shooter, perhaps because the video game is more participatory (and therefore perceived as less agenda-driven) than the war movie.

Some critics have called Lebanon an “anti-war movie,” but I don’t think this simplistic label does Maoz’s film justice. Yes, it does feature moments that discourages damn near anybody from wishing to participate in war. A gunner is ordered to fire upon a building and hesitates when he realizes that people will die. His pause causes a soldier on his side to die. Every action — the decision to fire or the decision to freeze up — has a mortal consequence. But is that anti-war? Or is that reflective of human behavior?

I would argue that it better fulfills the second question. A war movie works not so much for its “accuracy,” but for its willingness to explore uncomfortable or conflicted feelings. I’ve described Lebanon to some friends as “Das Boot in a tank,” but, in hindsight, this is probably too formulaic a description. For Lebanon is courteous enough to remind us that these flawed soldiers are caught within a mobile prison, and that the jail cell extends to curtailed interaction. One young man asks if a message can be sent to his parents and is denied. Another man thinks he speaks another language, but remains unfamiliar with the dialect of the man he needs to talk with. These crushing moments of isolation offer us some idea of the fortitude it takes to stick through a neverending war stint. Perhaps there will be ferocious discussions among about whether Lebanon does such communication among soldiers justice. Maoz has stated that he wishes to open up a dialogue with this movie and get people talking about vital issues. And if a film (or a filmmaker) is open to such dialogue, the question of “accuracy” is largely irrelevant.