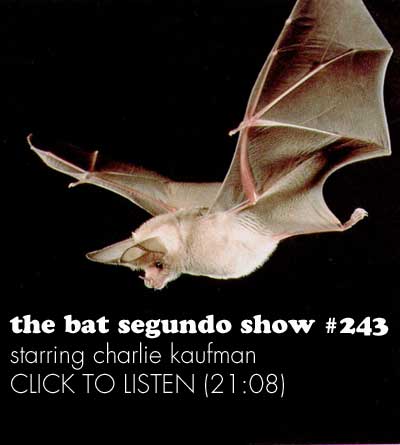 Condition of Mr. Segundo: Lost in the endless ebb and flow of emotional and cerebral ideas.

Subjects Discussed: Mr. Kaufman confronting more energy than he is accustomed to, whether or not Mr. Kaufman is an idea man, Mr. Kaufman’s slow conceptual process, exploring the possibilities of an idea peer review process for Mr. Kaufman, whether an idea can be emotional, what Mr. Kaufman has to do to impress our interviewer and the audience, how Mr. Kaufman changes, the issues that arise from Mr. Kaufman’s experiences, coming closer to a complete resolution of the world, shots of clocks in Synecdoche, New York, misunderstandings from Hollywood journalists, initial assemblies, how time seems to speed up as Mr. Kaufman gets older, walking by a clock that was a piece of graffiti on the wall, Caden and his colors, how Mr. Kaufman talks with the costume designer, whether or not clothes are comfortable on Philip Seymour Hoffman, Beckett’s Act Without Words, Mr. Kaufman trying to get closer to who he is, trying to avoid copying presentations of relationships from movies, Death of a Salesman, The Trial, literary influences, Equus, Proust, near literalisms, writing the Harold Pinter scene when revising the screenplay, and verifying real world headlines through the act of writing. 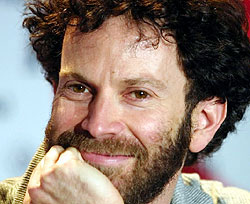 Correspondent: It’s safe to say that you are an idea man. So I must ask you: to what degree do you worry about an idea? Does your mind brim with more ideas — even correct ideas — than you can possibly use? Are you thinking of ideas right now? Is there a slight sense of panic with any idea? What is your idea of ideas?

Kaufman: Well, this whole question is based on the premise that I am an idea man, which I’m not sure that I agree with.

Kaufman: So I’m trying to break down what you asked me. And I don’t know. How am I an idea man? To turn this around. On you, Ed.

Correspondent: Well, I would argue that this film is laced with endless ideas meshing against each other.

Kaufman: Yes, it has a lot of ideas. But the ideas came over a two-year period, as I wrote the script. It’s not that I was furiously — like you or your girlfriend — furiously writing 700 pages in two days so that you could read it two days later. I mean, it’s slow. And sometimes it doesn’t happen at all for long periods of time.

Correspondent: So it’s the impression, I suppose, of being an idea man based on the final output here.

Kaufman: I mean, I think you thought that before.

Kaufman: But it’s not true.

Correspondent: Let’s talk about it.

Kaufman: Let’s turn it around.

Correspondent: Okay. What is the actual ratio of you coming up with an idea? Is it one idea every 2.2 days? What’s the deal?

Kaufman: I would say that…(to himself) you figure two years….maybe it’s an idea a week.

Correspondent: And you have to determine whether…

Kaufman: And this is terribly disappointing for you.

Correspondent: Oh no! It’s actually quite interesting! I’m wondering. Do you have a certain….? Over the course of a week, do you determine whether that idea is correct in association with another idea? Is there kind of an idea peer review process that you run across in your mind? I mean, what’s the situation here?

Correspondent: I think an emotional idea is nevertheless an idea.

Kaufman: Okay, then I…

Correspondent: You’re assuming that an idea is based entirely on cerebral terms. And I don’t think that’s necessarily the case.

Kaufman: Well, it may just be more the way that you’re presenting it. It feels….when you talk about ideas, and how many ideas you come up with, blah blah blah.

Kaufman: And scientific. And so yes, I have emotional ideas.