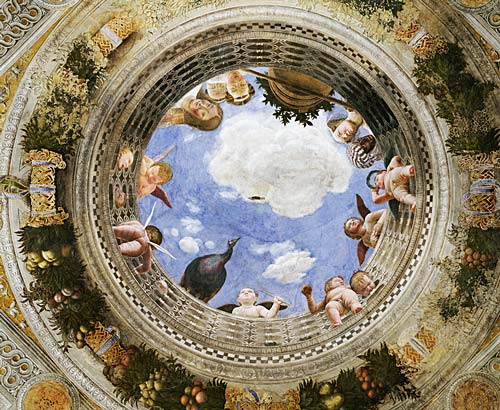 The geeks in the upstairs apartment moved out. I called them the geeks because I always heard the guy drilling holes into the walls at odd hours — the working theory being that he was constructing some homemade dungeon. I once heard the Nazi theme from Day of Defeat booming through his speakers, the battle sounds rattling through that thin partition between ceiling and floor. The first geek — a dark-haired, t-shirt wearing dude around thirty — was lonely. There were prospective dates, but enough disparate intervals between women for any armchair sleuth to adduce that he never really made it past one or two invites up to the apartment. But I cheered him on. Even if I didn’t really know him aside from quiet acknowledgments in the elevator.

But eventually he got lucky and he found someone who understood him. And I was very happy for him! And she was very loud when they rattled the floorboards, sounding like a soprano just getting warmed up, the two of them going at it with the stamina of ten stallions. And he stopped playing first-person shooters. He was thankfully into first-person plural now, even if it was all quite loud. They always started around one in the morning. And he would laugh long and hard just after he came. And they would sometimes make funny childish sounds together that would reverberate through the partition.

I realize that all this sounds a bit creepy and vaguely invasive. There’s no way to convey the truth of this casual eavesdropping and come away innocent and unscathed. I fully expect some authority for decency or morality to knock on the door if my account should make the rounds. I can only say that I didn’t go out of my way to overhear these things, nor did I spend an unhealthy amount of time dwelling upon all this. But you must understand. It’s a bit difficult to ignore neighbors having sex. And you can’t exactly introduce yourself. Because your neighbors know they’re being quite loud. And you can’t exactly knock on their door with baked cookies and a bottle of scotch and say, “Hi there! I just love the way you fuck your girlfriend, and I thought maybe we might have a mixer!” This is something we never discuss in American culture. But maybe we should. Of course, if you opened up an honest dialogue with your neighbor, any reasonable person would beat the hell out of you or ensure that you spend the rest of your life on some predatory database.

They soon spent a good deal of time together. The nightly thumping became as regular as the gunshots that sometimes stirred us out of bed at three in the morning. And then the sounds stopped. They weren’t always there. Then they were. And then they were moving out to a new love shack. An ugly couch made its way to the first floor. It was initially accompanied by a note, beseeching tenants not to take it. Then the note disappeared. Presumably, the girl geek had talked some decorative sense into the guy geek. It truly was an ugly couch. So ugly and brown that nobody in the building wanted it. The couch was found outside a week later, taking hits from the rain. For all I knew, the geeks had gone at it on that couch. Maybe there was a time in which they had valued the couch. Perhaps this was furniture designed only for lost weekends.

But when the couch was gone, I knew that the geeks were gone for good. That regular libidinous rhythm had permanently disappeared. And I wondered what percussive effects might serve in lieu. Yes, time marches on. People change and move. The geeks may now be tormenting or delighting some other neighbor. But we were the neighbors designated to hear their grunts and moans! No more.

I certainly have regrets about this peripheral “relationship” with my neighbors. Why didn’t I use a decibel meter to get a precise reading of their sounds? I’m fairly confident that they defied a few noise ordinances, and good for them. Why didn’t I find out what the drilling was all about? Why didn’t I use a little know-how myself to spy through the ceiling? We cross into the unethical. And answering these questions would have taken away from some of the mystery.

Thus, I think it’s important for us not to discount the neighbors who fuck each other blue. These geeks, without even knowing it, spawned enigma and curiosity from their downstairs neighbors. And that, I would argue, is a positive achievement for the human race.