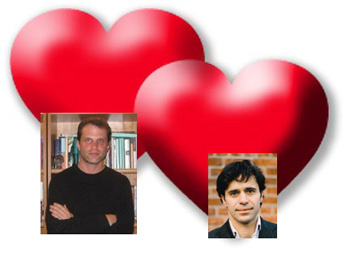 Longtime enemies Mark Sarvas and Keith Gessen were seen walking in Central Park, holding hands. There were even peals of laughter and a few hearty back slaps.

“I tried to send the tip into Gawker,” said 21-year-old video enthusiast Holly Brendon, “but they told me that it would get in the way of tarnishing Emily Gould’s reputation.”

Brendon said that she would be uploading her footage to YouTube later this afternoon, so that “readers could decide for themselves, the way they always do on the Internet.”

Several references on Gould’s blog involving “the other man” and John Banville do lend credence to Brendon’s extraordinary claims. And a recent post on The Elegant Variation reports that Sarvas is “brushing up on his Russian.”

But a violent enforcement along these lines may prove difficult for Mr. Crouch. Neither Sarvas nor Gessen have ever been spotted at Tartine.