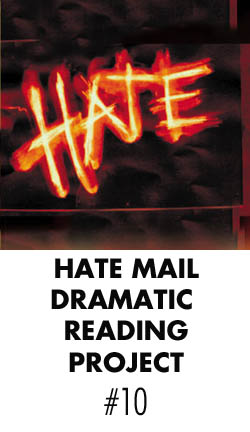 The latest installment in my ongoing Hate Mail Dramatic Reading Project, read in the style of Mel Gibson talking on the telephone.

Earlier in the day, I had emailed a “journalist” some off-the-record information — no specific quotes, just some key data that he might wish to investigate for a story. I believed that this information might be of help to him. Despite being clear to point out to the “journalist” that the email sent to him was “off the record” and that I could not divulge the specific quotes or the absolute specifics out of respect to my subject, the “journalist” violated my trust and posted the email anyway. I then telephoned the “journalist,” asking him to remove the post in a firm yet polite tone.

This “journalist” then emailed me an ALLCAPS email. Who sends emails in ALLCAPS anymore?

The following clip represents my dramatic reading of the hate mail in question, read in the style of Mel Gibson talking on the telephone. The names have been changed.

I plan to continue reading any and all hate mail that arrives my way. And I will be happy to read any specific hate mail that you’ve received. (If you do send me hate mail for potential dramatic readings, I only ask that you redact the names of the individuals.)