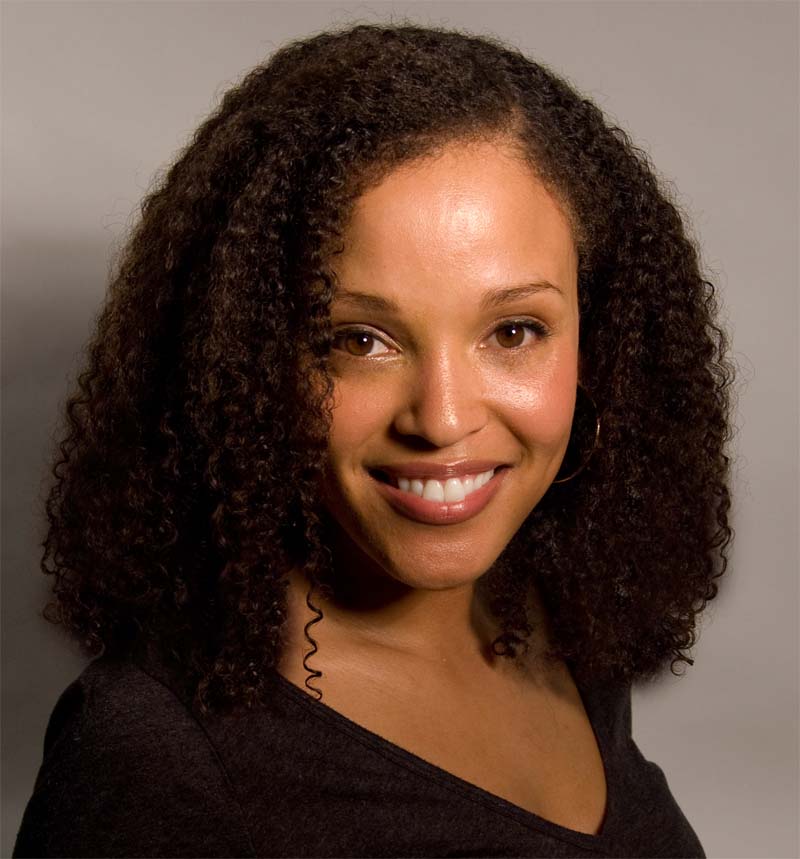 In this 40 minute radio interview, National Book Award winning novelist Jesmyn Ward discusses Salvage the Bones, why reactions to Hurricane Katrina made her angry, life within a poor community, trees with limbs, smoothies, and models of womanhood.

Jesmyn Ward appeared on The Bat Segundo Show #463. She is most recently the author of Salvage the Bones.

This episode of The Bat Segundo Show is brought to you by Audible.com. If you want to listen to Jesmyn Ward’s Salvage the Bones (available at Audible.com), and help keep this show going, sign up for a free audiobook and a 30 day trial. Use this handy link: http://www.audiblepodcast.com/bat

Condition of Mr. Segundo: Testing the limits of his fury towards the Bush family.

Subjects Discussed: Smoothies, fruit, bad franchises, Edith Hamilton’s Mythology, what it means to be a mother and a woman, Medea, America’s lack of mythology vs. Greek mythology, life within a poor community, Katherine Boo’s Behind the Beautiful Forevers, an author’s responsibility to community, the regional limitations of contemporary American fiction, being made angry by comments relating to Katrina, Pat Robertson, Barbara Bush’s insensitive comments about Katrina, FEMA and Michael Brown, novels of ideas, the physicality of characters, sinewy muscles, stomachs in fiction, close third person vs. first-person perspective, bad models of womanhood in the natural world, language, China as an anagram of chain, words as tokens of physical identity, present stigmas against figurative language, collisional rhythm, Outkast and Deuteronomy, finding an incidental rhythm, when to resist feedback that gets in the way of a natural voice, violence in fiction, creating a ferocious and multidimensional dog in Salvage the Bones, being surprised by the middle, pit bulls, Manny as a conflict generator, the mysterious ghostly mother, Hemingway’s iceberg theory, sexuality and promiscuity, unstoppable emotional forces, not glossing over the truth, describing trees with limbs, paradisaical cesspools, keeping a natural environment alive, and finding the right details to depict impoverishment.

Correspondent: You have Esch reading this Edith Hamilton book, especially Medea. And you also point out near the end that mythology won’t entirely help you out in a fix. Esch says that she is stuck in the middle of the book. And aside from Hamilton, I have to ask, did you draw on any other inspirational mythology when you were creating this book? Was there a point when you abandoned mythology at all like Esch? I wanted to start off here from the origin.

Correspondent: Do you consider them mythology?

Ward: Well, they are tales that explain how the world became what it is. So in ways, I think it is. But did I use any other sorts of mythologies in this, in Salvage the Bones? I don’t know. I don’t think that I abandoned it. I think that mythology’s important to her because it’s helping her understand what it means to be a mother and what it means to be a woman. So therefore, like even though she turns away from it, she still can’t help but go before the storm. To come back to that story and read more of Medea. Because see, she’s searching. And in there, she’s found something. She can’t figure out what it is. But she’s found something.

Correspondent: But it’s interesting that you would have her cleave to mythology in America, which is a nation that is constantly in search of its own great mythology. The Great American Novel. We’re Number One. You name it. I’m wondering if this mythological concern was in some sense related to, well, whatever American identity that Esch and her family had.

Ward: Well, I think she feels very much like an outsider. I think that the culture that she is from, that she lives in a small world — you know, a poor black community. I mean, I feel like they think they’re outside of that. They exist outside of that American dream. And so, in ways, they have to look elsewhere. And Esch, particularly, she finds that she is even more isolated than that community that her family is. Because she’s this only girl who grows up in a world full of men. So she really has to look outside what is easily available to her or in front of her in order to find some sort of kinship.

Correspondent: This leads me to wonder. Have you read Katherine Boo’s Behind the Beautiful ForeversWard: No.

Correspondent: Because your book, on a fiction level, reminded me of this great journalism book. Which I think you would love and I’m just in total admiration of. It basically deals with this inner life of the people who are poor, who are collecting trash on the edge of Mumbai. And your book reminded me very much of this response to typical First World guilt or what not. That instead of actually pitying or looking down upon these people, your book is very much about giving all of these characters a great inner life. They do live. And it’s important to remember that they live. And I’m wondering where this impulse came from. Whether this idea of allowing Esch and her family to live was in some sense a way for you to counter any accusations of “Well, I’m responding to politics” and so forth.

Ward: Well, I think that I write about the kind of people that I grew up with, and the kind of people that are in my family and about the place that I’m from. I mean, I’m from a poor rural Southern community that — at least in my part of the community, which is mostly black. And you know, our family’s been there for generations. And I have a very large extended family. I’m related to almost everyone in my town. And so, for me, it’s like writing about the people that I’m writing about — you know, I feel that it’s a responsibility. Because I’m writing about my people. Even though my path is very different from most of the people I grew up with, I still consider myself — you know, that’s still my place. And those are still my people. So for me, that’s what this is. I don’t feel like an outsider. I feel like an insider who’s speaking out for the rest of the people inside my group.

Correspondent: Sure. I totally understand that. Do you think that this is going to be how it’s going to be for your fiction career? That you have to respond to this responsibility of speaking for this group of people? Because nobody else will. Or, in fact, one might argue that maybe American fiction, or regional American fiction, isn’t actually hitting that particular territory. What do you think of this?

Ward: I mean, I think that for the foreseeable future, as far as my writing life is concerned, I intend to write about the place and the people that I come from. Because part of the reason that I do so — I mean, part of the reason that I wanted to write about Katrina is because I was uncomfortable and made angry by the way that I heard others speak about people who didn’t evacuate from the storm. About people who stayed. About poor people who were caught in the maw of that storm. And I wanted to write against that. And so in a way, I do think that the voices of the people that I write about, or even just the people that I write about, that they’ve been absent in the conversation, in the national conversation. And that’s part of what I’m trying to do by writing about them. Introduce their voices into the conversation so that people pay attention and people aren’t so quick to write them off as worthless or stupid or all the other crazy things that I heard after Hurricane Katrina.

Correspondent: Are there specific things that really pissed you off?

Ward: Well, I heard this one woman. She’s from Atlanta too, which is close enough. It’s six hours away from where I live. And she said that the reason that Hurricane Katrina had hit us and done so much damage is because we were sinful. That we were in a sinful place. Like, for her, it was very much about — you know, she was approaching it from a religious standpoint.

Correspondent: “Well, they brought it onto themselves.”

Ward: Yeah. So we deserved it because of our proclivity for gambling and drinking and all the rest. And then other people that I encountered said that, one, they couldn’t understand why people stayed. Why people would stay and try to survive a hurricane like that. And, two, that they didn’t understand why people would return and try to rebuild. Because what’s the point if global warming just means that there are going to be more storms, there are going to be just as powerful as Katrina and more of them are going to hit that part of the United States. And that comment really made me angry. Because that person was from L.A.

Ward: That person was from California, which has its own.

Ward: So I just heard commentary like that. And it just made me really angry. And I wanted to counter those. I really felt that our voices were absent from that. Especially that conversation. You had what’s her name. It’s Bush’s mother. Remember when she said that crazy stuff?

Ward: Yeah. About the people from New Orleans. Like this was like a vacation for them. Because they got to go ahead and stay in the Astrodome. Like really? Are you serious? Just so far removed from the reality of these people’s lives and their struggles. Just so far removed. Comments like that just made me realize how, when people said them, it’s like they didn’t recognize our humanity at all. And that really made me angry, and made me want to address Hurricane Katrina in the book.

Correspondent: Well, this seems as good a time as any to confess to you, Jesmyn, that at the point where they are scrambling for their boiled eggs and their packages of ramen, and there is of course the depiction of the carton of bones in the fridge — and then they say, “Oh, well, FEMA and Red Cross will help us out.” At that point, I thought I had a maximum level of anger towards Bush and Brown. And then I read that. And I became even more furious towards them.

Correspondent: And you’re talking here about anger. And you’re talking about it in a very calm manner. And this book is extremely focused, I would say. So what did you do to not get so caught up in this understandably furious impulse and actually focus in on the book? Was it really the inner life of these characters that was enough for you to counter any socioeconomic, political responsive bullshit?

Ward: I think so. Because I feel that my book will fail if my characters are not alive on the page. There have been great novels of ideas, right? But, for me, the kind of writer that I am, I can’t write those novels. And I don’t think that they would be successful novels.

Correspondent: Why do you think you can’t write a novel of ideas? Or that the ideas are best represented in the environment that you set down?

Ward: I don’t know. It’s just not my style. What comes naturally to me is telling a story that’s invested in people and in the characters, and making them live on the page.