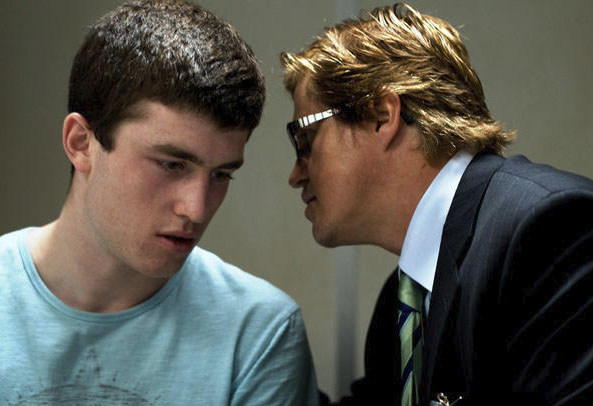 The Australian import has been identified as something close to a masterpiece. The problem here isn’t the execution, but the material.

The Australian import, Animal Kingdom, has been identified as something close to a masterpiece by several critics — perhaps because writer-director David Michod has been shrewd enough to populate his mobster epic with enough characters to rival a Tolstoy novel’s head count. But much like a Christopher Nolan movie, Animal Kingdom carries the stench of a film that thinks it’s more clever than it really is. Here is a film that knows how to balance its characters, but it doesn’t always give its fictive population time to breathe or inhabit a tableau. And very often the illusion is lost. Yes, the film does probe into a mob’s family dynamics, both biological connections and those tenuous ties forged out of sweaty necessity. Animal Kingdom is often interesting when pursuing fluid rites of passage — such as a surrogate father ordering his surrogate son about the importance of washing his hands. It maintains a static aesthetic, somewhat voyeuristic with its camera, where grocery stores transform into impromptu offices and bland subdivisions become killing fields for thugs to mete out vengeance. This ability to suggest a topography functioning on multiple levels, often unseen by the very people who reside there, did hold my interest. I also appreciated the moral sketchiness of the police, who prove more fungible in their allegiances than a politician offering his avaricious palm to the highest bidder, along with the cavalier way in which one man invades a kid’s privacy, walking into a bathroom while the kid is showering to deliver an order. Such grittiness invites modest comparison to John Cassavetes’s The Killing of a Chinese Bookie. Michod must be applauded for attempting to break free from the conventional yoke.

The problem here isn’t the execution, but the material. While Guy Pearce (as a detective investigating the operation) and James Frecheville (as an orphaned teenager inducted into the savage criminal life) both deliver strong performances, the movie is so bogged down in plot that it doesn’t quite have enough room in its suitcase for that pivotal mob movie atmosphere. Howard Hawks was courteous enough to give us those enticing Xes scattered quite delightfully across Scarface‘s mise-en-scene. Gordon Willis’s sepia pools of light in The Godfather and Michael Ballhaus’s famous Steadicam club scene in Goodfellas likewise cemented the visual feel of those two masterpieces. And even that dependable Method man Cassavetes, in The Killing of a Chinese Bookie, demanded that his nightclub scenes be shot through gels. Abel Ferrara’s films likewise understand this pivotal balance between the unctuous wheels of organized crime and a theatrical visual palette.

So if these are the standards with which to judge Animal Kingdom, then this particular mob movie doesn’t quite hit the mark. None of the characters here have the personality of Vincent Cassel playing the titular serial killer in Mesrine: Killer Instinct. This is a universe in which most human beings have thrown in their respective towels, no matter where they may be situated on the food chain, and it’s only a matter of time before animal nature kicks in. Yet this movie lacks the curiosity to investigate precisely how these figures got there. Yes, some move into the criminal world by accident or circumstance. But at the risk of dredging up a Heisenbergian aside, a movie so content to wallow in resigned sad sacks doesn’t entirely capture the human condition. Michod is happy to turn vaguely stable souls into animals, but he doesn’t have the courage to suggest indeterminacy. And this inability to fully embrace anarchism is more than a tad incongruous within a mob movie.

Animal Kingdom is certainly stylized in this prefigured inertia. The camera is often static. It is sometimes singular in hue, such as the dark reds captured within a hotel room, whereby figures begin to spin about as if caught in circular existential traps. There’s often the dim drone of a television set playing somewhere in the background or a menacing car in the distance. Michod certainly loves his corridors and often enlists his cinematographer Luke Doolan to shoot them deep. The film is also very solid in its framing. There are some conversations in which shoulders never depart from the shot. But when you have characters say “What’d you let me fall asleep for?” or offer such homilies as “You survive because you’ve been protected by the strong,” it becomes self-evident that Animal Kingdom‘s rigid philosophy is, like Nolan’s films, rooted in a libertarian-minded philosophy that doesn’t account for the full human spectrum. In a world that presents us with such delightful souls as Steven Slater cracking open a beer and shooting down a JetBlue slide, Animal Kingdom, to my minority mind, tackles a needlessly narrow focus.