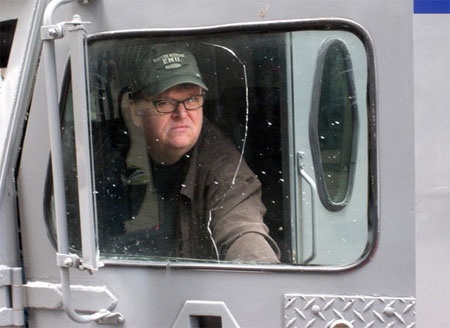 It seems to me that, if you’re rolling out the howitzers with the intent to destroy an ideology, you should probably blow the shit out of everything. But Michael Moore’s latest film, Capitalism: A Love Story, feels passe and diffident, despite the fact that it has gone out of its way to include footage from only a few weeks ago. Maybe this film’s dated feel has much to do with our present information age. In an age of YouTube and Twitter, how can any well-meaning documentary capture a permanent image for posterity? But Moore’s best films (Bowling for Columbine and Sicko) have worked because they operated within a specific focus. By examining one aspect of the failed American system, Moore has demonstrated a knack for showing a regular audience how the world works according to his mind. But with a more general emphasis, Capitalism: A Love Story, much like Moore’s narcissistic offering The Big One, is unfocused, messy, and even contemptuous of its intended audience.

For example, Moore suggests that the derivatives which guide the stock market cannot be understood by anybody but the Wall Street guys. As one economist explains a derivative to Moore, we see Moore’s eyes glaze over. Moore then cuts to an academic having difficulty explaining a derivative. Lost within all this didactic comedy is the fact that a collective website called Wikipedia allowed people to come together to explain a derivative in fairly straightforward terms .

But forget how the Internet can galvanize the people (and lead Obama to presidential victory). Let’s talk about the distinct possibility that Moore’s starting to rust within his gilded cage. Since Moore has clearly not thought much about his thesis, he seems to have fallen asleep at the wheel of his liberal limousine. He looks into the recent Pennsylvania child care scandal, in which two Pennsylvania judges bartered kids for cash. But he doesn’t use his ambush tactics to interview the two judges. (In fact, unlike Moore’s other films, this film lacks a heavy along the lines of Phil Knight or Charlton Heston for Moore to confront at the end. And without that perceived villain, Moore’s hollow demagoguery is revealed for what it is.)

To the film’s credit, it does go after Democrats — including Senator Christopher Dodd — and points to Democratic complicity in the Goldman Sachs bailout. Moore hasn’t been this vocal about the lies of the two-party system since he campaigned for Ralph Nader in 2000. (He later campaigned against him in 2004.) But Moore is hardly the fearless agitator he thinks he is. He’s too afraid to criticize Obama’s many failings, preferring instead to dwell on that hopeful day in November when we elected “our” candidate and we used “our” votes to get the Democrats into office. Of course, months later, millions of jobs have been lost, the unemployment rate hovers around 10%, and universal health care — part of FDR’s Second Bills of Rights, a clip of which is included in this film — remains distant. But Moore doesn’t pin any of this on Obama. In fact, Bush 43 receives more camera time than Obama. (That’s a bit like a bunch of philosophers arguing about the 1968 riots as people are losing their jobs. Oh wait. I saw that happen last year when Bernard-Henri Levy and Slavoj Žižek argued last year at the Celeste Bartos Forum. I guess we’ll never have the guts to discuss current predicaments.)

Moore points out that Jonas Salk offered his polio vaccine for free. And at the film’s end, Moore suggests that the audience should be doing what Moore’s doing. Of course, this comes after we’ve paid $10 to see the movie. Moore stands to make millions from this movie. Is he really all that different from a rapacious CEO? Glenn Beck may want all of his pie, but then so does Moore. It’s insulting to have someone in the film referring to mainstream media coverage as “propaganda,” when this film clearly serves the same function.

This is not to suggest that our nation doesn’t need a corrective or that Moore’s services are no longer required. There is, frankly, no other filmmaker out there who can get progressive messages out to a mass audience. He is not, as The New York Times suggested, our little tramp, but there’s nobody else out there stepping up to the plate in quite this way. But Moore’s party mix of stock footage, snarky narration, and righteous indignation is starting to wear thin. It’s the kind of thing we expect out of a filmmaker in his twenties and his thirties, not a 55-year-old filmmaker. Moore naively believes that Wallace Shawn’s presence will somehow attract his established liberal affluent audience. But this is clearly a film made for Middle America, and it doesn’t understand that Middle Americans are often much smarter than bicoastal elitists.

Case in point. The naive majorette Rachel Sklar, who participated in an intellectual sweatshop during her tenure at the Huffington Post by collecting a salary while not paying her contributors, tweeted in response: “WOW. Michael Moore’s latest movie is gonna stir up some SERIOUS shit. Wow. Wow. One more time: Wow.”

No, it’s not. You can cream your pants like it’s the first time all you want, but capitalism isn’t going away.

In fact, Moore’s film really isn’t all that anticapitalist. As Moore points out, capitalism under a more equitable tax system wasn’t so bad for the middle-class. (See this helpful spreadsheet from the IRS containing lowest and highest bracket tax rats from 1913 through 2008. From 1944 to 1963, the highest bracket tax rate hovered around 91%.)

Moore pins the blame on Reagan. And the highest bracket tax rate did indeed fall from 70% to 50% in 1982, eventually down to 30% in Reagan’s second term. But drops, as we all know, occur in degrees. This didn’t happen overnight. Surely President Johnson should be held just as accountable.

So if we accept Michael Moore’s latest film, Capitalism: A Love Story, as a series of generalist sentiments designed to fire up the masses, then, to my mind, it’s probably Moore’s most toothless and tepid film. The film is entertaining enough. We get the obligatory shots of Moore being denied entrance into corporate buildings by security and Moore shouting through a bullhorn. We are horrified by Wal-Mart filing a life insurance policy against one of its employees and collecting a tidy sum (without a cent going to the family), as well as the phrase “dead peasants” used in the insurance policy. On the other hand, if people have allowed capitalism to continue, shouldn’t they be taken to task just as much as the corporations? The film’s credits feature numerous quotes from John Adams and Thomas Jefferson. One key Jeffersonian sentiment that’s missing: People get the government they deserve.