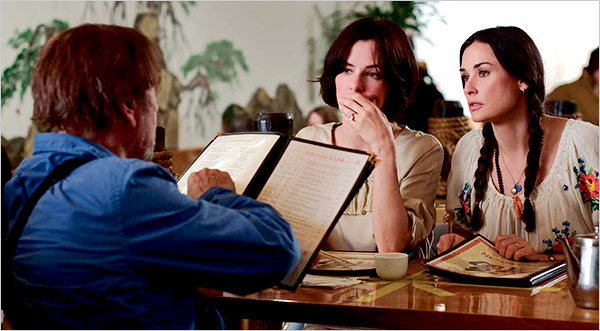 It is difficult to muster much enthusiasm for Mitchell Lichtenstein’s latest film, Happy Tears — in part because Tamara Jenkins gave us the similarly-themed The Savages three years ago, a remarkably moving film about middle-aged scions learning to care for a decaying father — and in part because Lichtenstein strikes me as an insensitive dilettante all too happy to humiliate the talent he has at his disposal. I could very well be wrong, but a gnawing feeling kicked in upon seeing Rip Torn, a talented actor who has had a series of alcohol problems preceding this film’s production period, cast as an alcoholic man climbing into the rough crag of dementia with two near-the-hill daughters. It continued with Ellen Barkin, a talented thespian who, like many aging actresses, has had an army of surgeons carve up her face into something bearing little resemblance to natural physiognomy, cast here as a cartoonish junkie. To a lesser extent, it carried on with Parker Posey, an enjoyable indie film queen whose peppy demeanor has worn a bit thin, who is cast here as a flighty and imbalanced woman wanting to pop a baby with her flighty and imbalanced husband. There’s one point in the film where Lichtenstein is so desperate to pound home this tired character trope that he places a denuded Posey in a cheap-looking CGI aura, the result of drugs, where a voice chants, “Everything turns out for the best.” If that isn’t a desperate deus ex machina originating from an “artist” uninterested or incapable of examining human behavior, then I don’t know what is.

But I’m straying a bit from my point. Torn, Barkin, and Posey were certainly complicit in taking these roles. Still, from an ethical standpoint, it seems to me that a writer-director, working in an occupation that involves protecting the actors, bears a sizable responsibility for ensuring that his cast is given the best opportunities to demonstrate why we marvel at them in the first place. If a director has any decency, he will be aware of where an actor is presently situated in the careerist food chain and will do his damnedest to accommodate. Even Quentin Tarantino, doped up as he is on too many movies, has sought second chances for his overlooked actors. No such luck with Lichtenstein. Judging by the needlessly glossy press booklet I received from the amicable publicist, and from Lichtenstein’s ability to nab Demi Moore for this film, I’m guessing that Lichtenstein made this movie shortly after running into a bit of money from his father’s comic book painting magic. Again, I could be wrong. But I was so underwhelmed by this film that I’m too lazy to Google it. Still, let’s go with it. If Happy Tears (rather than A Single Man) is the result of such lavish self-financing, then perhaps the presentation of connective failings isn’t always compatible with the unfettered expansion of purse strings.

There’s a plotline in this film involving Torn’s character hiding some buried treasure somewhere in his Pittsburgh backyard. One gets the strong sense that this reflected Lichtenstein’s muddled creative process. When Posey’s character divests the family home of furniture, instead of being drawn into the film, I envisioned Lichtenstein tapping away at the keyboard, wondering how he could squeeze some life out of this minimalist situation (and failing). The characters are given cardboard-thin domestic situations with which to mutter predictable lines. Lacking the ability to make these characters pop, Lichtenstein tosses in random backstory (both daughters stripped at one point; dad slept around) that is presumably intended to shock, but that draws additional attention to how one-dimensional these characters are. He can’t even capture Alleghany County very well. He throws his characters in flat-looking Chinese restaurants, but lacks the contrapuntal ability to extend his visuals beyond the mundane. This seems counter-intuitive, seeing as how Lichtenstein wants to make a greater point about what it takes to move forward and stay relatively sanguine when you regularly have to clean up your father’s shit (quite literally). Altman would have made something of this. But Lichtenstein, despite appearing as one of the fresh Vietnam recruits in Streamers, is no Altman. I don’t even know if he’s even a real filmmaker.