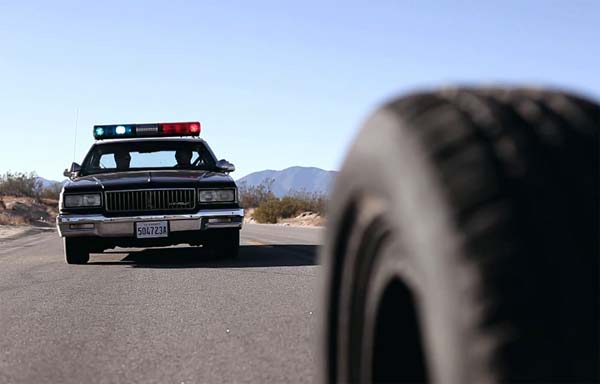 Rubber is a quite pleasant and deceptively pointless picture about a murderous tire. It may or may not be channeling Beckett.

Quentin Dupieux’s latest film, Rubber – not to be confused with a effervescent sex education film – is not for the uptight analytical type who needs to know the precise motivations of a sentient tire (credited here as Robert) emerging from dead detritus in the desert, rolling over spiders and scorpions in the early minutes of his revitalized life, developing telekinetic powers that involve vibrating its body piles violently and causing distant objects to explode, and then using these same powers to go on a murderous rampage. But don’t let these eccentricities fool you. Rubber is a quite pleasant and deceptively pointless picture that did have me wondering why Dupieux – an electro musician turned filmmaker – did not attempt to get Goodyear to bankroll the whole of his meager budget. (Perhaps Dupieux has issues with product placement. I did notice Mountain Gust enjoyed by one character.)

When Robert (actual name for the tire or name for the character?) isn’t enjoying these homicidal activities, the tire watches television, stares at nude women taking showers, plops over sideways every so often for a nap, and rolls into a swimming pool. Discounting Robert’s need to kill people, such behavioral range suggests that Dupieux has closely observed the average American male. Lacking the orifice to enjoy a cerveza in the desert, Robert instead uses his considerable energies to cause human heads to explode. Rather curiously, Robert doesn’t require an air refill at the gas station, presumably because there is enough hot air contained within the film’s story to sustain him.

If the film’s premise recalls the sack awakened by a long pole in Samuel Beckett’s Acts Without Words II, then the presence of spectators within the film, all observing the tire narrative from afar and gradually starved by the folks putting on the show, suggests an homage to Augusto Boal. I don’t believe the Theatre of the Oppressed was especially keen on turning its audience into a bunch of starving animals wolfing down a turkey – a suitably carnivorous image we see midway through the film. After all, if we’re going to be equitable about the artistic experience, shouldn’t we have starving audiences in addition to starving artists?

Forget the theory. Forget the influence. Dupieux would rather have his audience believe that much of this is fun and absurdist bullshit. And it is. Before the tire comes alive, we are introduced to chairs placed meticulously in the road, which are then plowed down by a car. The car’s trunk is then opened, and a sheriff named Lt. Chad (Stephen Spinella) gets out, is handed a glass of water by the driver, and then addresses the camera. Lt. Chad informs us that there is “no reason” that the couple is mad about each other in Love Story. Why doesn’t anybody in The Excellent Chainsaw Massacre [sic] wash their hands or go to the bathroom? “No reason.” Why does Adrien Brody in The Pianist have to live like a bum when he has such remarkable piano skills? “No reason,” says Lt. Chad, conveniently ignoring the Nazis.

“Life itself is filled with no reason,” continues Lt. Chad. And we are informed that the film we are about to see an homage to “no reason.” In other words, this glorious fuck you gives Dupieux liberty to let loose countless what the fuck moments in the next 80 minutes. But we soon see that Lt. Chad is addressing a number of spectators, that binoculars are being disseminated to them so that they can track the tire. Never mind that they never really seem to have a great view or that the range of the binoculars extends for several miles, beyond any and all obstructions. Is Lt. Chad’s prologue directed at us or them? Does a participatory reference point even matter for a film like this? Later in the film, Lt. Chad, locked into one stubborn spectator’s need for the story to continue, dismantles the tire on his own car and announces to everybody, “That’s our suspect!”

To call Rubber postmodern is something of a mistake. You can’t take a film like this seriously. In fact, it’s more fun and more rewarding if you don’t. For my own part, my entertainment value greatly increased as I watched one self-important tool, who had offered a feeble intellectual defense of Sucker Punch just before the movie, fail to appreciate the glorious batshit madness before him.

Yet Rubber works beyond mere free association or curious cult offering. There are scenes in which the spectators remark upon the fact that they can be arrested for piracy, in which they quibble with the T&A moment, and in which they question the logic of the scene (and even question whether they should be offering commentary in the first place). There’s even a moment in which our guide Lt. Chad asks his fellow actors to shoot him with bullets to prove how artificial the environment is.

The film has a healthy contempt for what moviemaking has devolved into in recent years: namely, a process so mechanical and soulless that the latest forgettable $200 million 3D CGI extravaganza may as well be as a spare tire dropped into a pyre. Sure enough, Rubber‘s final moments features an army of derivative tires storming Hollywood. Who knew that it required a bloodthirsty tire to get us to reconsider our relationship to movies?