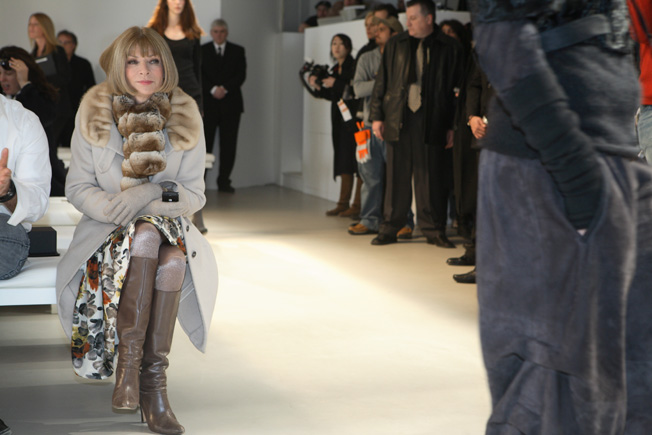 “People are frightened of fashion,” explains the frosty Anna Wintour at the beginning of The September Issue, a documentary concerning itself with the behind-the-scenes assembly of Vogue‘s September 2007 issue. I agree with Wintour. It’s not the fashion that frightens me, but the people who feel compelled to live for nothing but fashion.

Take editor-at-large Andre Leon Talley, a man so hopelessly flamboyant and fussy with his sartorial sensibilities that he cannot be bothered to wear a T-shirt and shorts on the tennis court. Why is he on the tennis court to begin with? Wintour suggested that he get some exercise. Listen to the great dictator. She might end up dancing with your globe.

After seeing this film, I think it’s safe to say that I’d sooner place my head into an open oven with a Zippo than work for Vogue. This is a world run by vicious capitalists in which beauty is prepackaged with all the warmth of a malfunctioning Twinkie machine. An editor can slave for hours to find the perfect colors or a striking look reminiscent of a noir movie, only for Wintour to come in and throw out a $50,000 photo shoot on an aesthetic whim. Young designers like the bright-eyed Thakoon arrive slightly terrified of Wintour, but all too eager to supplicate for photo ops and other forms of commercial whoredom.

What is Wintour’s excuse? Why does this devil wear Prada? Her daughter, Bee Shaffer, quietly explains that she has no interest in getting into the fashion world. And in the film’s only unguarded moment with Wintour, she confesses that her family finds her vocation “amusing.” (Wintour’s brother, Patrick, is a long-time political editor.) This is not someone to be frightened of. This is someone to pity. If you can’t hold your head high after decades in the fashion world, then what’s the point of the work?

“Don’t be too nice,” says creative director Grace Coddington to the young editor Edward Enninful. “Even to me. Honestly, you’ll lose.” Enninful is later seen clutching a giant cup of Jamba Juice to get through the day, and I began to grow concerned over whether he was eating anything. Until I realized he wasn’t even drinking a real smoothie.

In fact, even accounting for the 300 hours of footage here whacked down into two, these people don’t seem to eat. “Stop at Starbuck’s please,” barks the thin-framed Wintour to her driver. Bottles of Fiji water are everywhere, guzzled down in lieu of a hearty meal and never enjoyed with other people. There is one moment in which Coddington pecks at a salad in a plastic container, but it’s only because she’s upset at another one of her meticulously arranged shoots being disposed of. You’ve got to be hungry for the work. You’ve also got to be hungry.

Coddington is the most interesting figure in this film. She’s the only editor at Vogue who still personally dresses the models. She’s also the only person in this film who uses older photographers as reference points. “It hard to go on the next thing,” says Coddington, when asked about so much of her work being thrown out. But she’s had the tenacity to stick it out with Vogue for forty years, just as long as Wintour. She seems tough enough to duke it out with Wintour over an artistic decision. Unfortunately, she’s not the one here with executive privilege. Hence, the sad salad-eating scene. “If the magazine doesn’t sell, I don’t have a job,” she says late in the film.

But to be perfectly fair, Vogue is still capable of some creative spontaneity. With numerous pages to fill at the eleventh hour, this documentary’s photographer, Bob Richman, is recruited to stand in for a shoot, jumping up and down for the camera’s lens to match a model’s gaze. It’s one of the most vibrant photos in the issue. Coddington, to her credit, asks the people not to Photoshop Richman’s paunch.

Sleazy editor after sleazy editor insists that the September 2007 issue of Vogue is “the biggest in our history.” But this is Vogue‘s history, not America’s. Is this really a sustainable fantasy? $50,000 of work thrown out? That’s a good annual salary for an editor who can do great things. Vogue can’t be entirely discounted, but this documentary does show that many things have gone horribly wrong. While I’m not necessarily in favor of seeing the magazine industry fold into oblivion, this film certainly fed my anarchist impulses. Fashion shouldn’t be this cartoonish. Is this the fault of the filmmakers? Were there unused shots of Wintour being human? I certainly hope so. But whatever the film’s oversights, perhaps some of the film’s subjects might be inspired by the depiction to remember the impulse of being alive. If they have souls left. Perhaps Conde Nast’s current financial woes are a self-correcting prophecy.