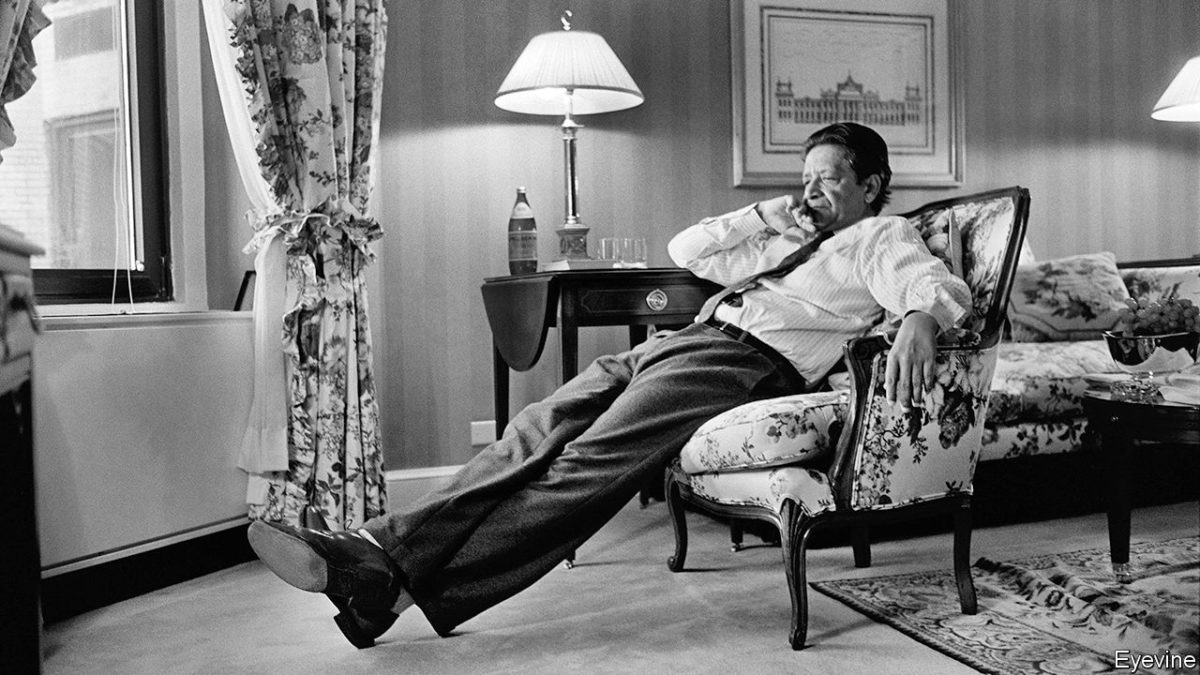 The case for ejecting V.S. Naipaul’s “masterpiece” from the canon.

(This is the twenty-ninth entry in the The Modern Library Reading Challenge, an ambitious project to read the entire Modern Library from #100 to #1. Previous entry: The Day of the Locust.)

I have to be honest. V.S. Naipaul’s literary work is so abominably heartless that I would be greatly tempted to fire bottlerockets all night from my Brooklyn rooftop while wearing nothing more than a male monokini if his scabrous worldview and his pointless head games were permanently erased from the canon. He is surely the most overrated writer of the 20th century.

I’ve delivered variations of these sentiments over the phone to amused literary friends, who, when they weren’t laughing their asses off over my five minute anti-Naipaul soliloquies, were good enough to urge me to forgo the semi-scholarly format of this ridiculous years-long project and simply speak from the heart. I shall do my best to be as thoughtful as I can about my Naipaul bellicosity, which is, alas, the only way to move forward with this project. I can tell you this much. Not even Finnegans Wake, which took me five years to read and eventually write about, made me feel as frustrated as I was with A House for Mr. Biswas. Even the books on the list that I haven’t cared for all that much (The Old Wives’ Tale, the wildly overrated Ragtime, the failings of Kim) still contained something essential or interesting. You could see why a bunch of old white dudes decided to canonize the books even if they seemed to be speaking a hoary language — even accounting for the folkways and mores of 1998. But A House for Mr. Biswas was a joyless chore during the two times I read it. It is a reactionary monument to imperialistic ugliness that isn’t so much a thoughtful examination of colonialism as it is an author catching mice in a glue trap and watching them squirm their way into a slow and painful death instead of putting them out of their misery with a hammer.

In his life and his work, Naipaul was a sadistic bully, a narcissistic tyrant, and a mean-spirited man who used his powers to punch down. The only quality that distinguishes Naipaul from Donald Trump is his descriptive acumen and his honed prose. There is a moment in A House for Mr. Biswas in which Naipaul has a mother snap off branches from a hibiscus bush to discipline her child and it represents that brilliant exactitude. But that’s pretty much it. There isn’t a single Nobel laureate who basks in repugnancy like this simply because he can. Knut Hamsun was a terrible person (who later turned Nazi), but his masterpiece Hunger actually made you feel something about the down-and-out impoverished wretch at the center of the novel. The late great Toni Morrison, inexplicably omitted from the Modern Library canon, used ugly imagery to reveal the deep humanity within victims of racism and oppression. But what does Naipaul offer other than pointless cruelty? James Wood offered the hamfisted theory that Naipaul adopted the dual role of the colonizer and the colonized to adopt “a cool, summary omniscience that he uses to provoke our rebellious compassion.” But I personally could not feel any compassion for Biswas, in large part because I was constantly aware of the manipulative way that Naipaul had rigged the game. Naipaul, in other words, is an old school bully lulling and gaslighting the reader into a phony empathy. Having no empathy to offer, Naipaul leaves such overanalytical and generous critics as Wood to mine the gelid prose and do the work that Naipaul himself couldn’t be bothered to do. That Naipaul was able to play this game of three-card monte on so many says a great deal about how the literary establishment has a knack for propping up bona-fide sociopaths. Even progressive-minded naifs like Teju Cole stumped for this novel, claiming House to be “a masterwork of realism,” but largely on the basis of its itemized lists and of the way that the book encumbers the reader with its turgid pace. Both Wood and Cole acknowledge that it falls upon the reader to provide the munificence that Naipaul himself cannot. But they refuse to acknowledge that the faults of House‘s thin characterizations very much fall on Naipaul’s shoulders. If a writer isn’t committed to depicting the human, then why even bother praising the writer?

For the Spainards, Mr. Biswas knew, had surrendered the island one hundred years before, and their descendants had disappeared; yet they left a memory of reckless valour, and this memory had passed to people who came from another continent and didn’t know what a Spainard was, people who, in their huts of mud and grass where time and distance were obliterated, still frightened their children with the name of Alexander, of whose greatness they knew nothing.

I don’t gainsay Naipaul’s command at the sentence level, such as the measured passage above. At times, Naipaul comes across as the holistic sage reminding us that all of our lives are mired in historical cycles in which we often forget the final festoons of the previous arc. But grifters often talk in cant that suggest a larger tapestry. If you speak in ways that suggest larger cosmic contours, many people are going to assume that there’s something more to your tale than a mean monodimensional character who treats his family badly and who spends most of the goddamned novel writhing in anger and resentment simply because he never has the guts to make a real decision. I suspect Naipaul has bamboozled so many otherwise cogent minds because this kind of pedestrian toxic masculinity, especially in an older book, can be easily excused as a “sign of the times.” But even with Wuthering Heights‘s Heathcliff, named by Bustle‘s Charlotte Ahlin as the “most toxic male character in all of literature,” we can still understand why he forces his son Linton to marry. Heathcliff grows nastier as the novel continues. But he’s still tormented by Catherine’s ghost and the dregs of being bullied and locked in an attic. Mr. Biswas, by contrast, loses his father Raghu early on in the book after Mr. Biswas, entrusted to take care of a neighbor’s calf, falls into a stream and drowns. Mr. Biswas hides beneath his bed in shame. Raghu dives in for the missing calf and his own son. Raghu dies. Emily Bronte had the smarts to connect Heathcliff’s psychology to the past, which makes him more than merely a “toxic male character.” We want to understand why he behaves as he does. But, with Naipaul, the drowning incident is rarely referenced again in the novel. So Mr. Biswas is a man flung into misfortunes in the present without really acknowledging his past. Does this make him as much of a dope as any other ostensible cipher living out a failed life on a former Spanish colony? Apparently.

But there’s something much seedier at work here. As I pointed out with A Bend in the River, Naipual’s bad faith portrayal of low-caste types has always felt supererogatory. He isn’t taking potshots in an interesting or bona-fide punk rock way that challenges the audience. He revels in filth and ugliness and he chooses targets who are just too easy to flambee. You may recall my love for Erskine Caldwell’s Tobacco Road, which featured some wild and outlandish depictions of degeneracy, but Caldwell used his broad caricatures to implicate his audience for their generalizations about the poor. It’s clear to me that Naipaul doesn’t have any such grand game afoot here, other than reveling in his hideous hubris. He’s happy to see his inventions rot. The man lived to hurl unpleasant observations about unpleasant people, both in his life and in his fiction. And I say this as a huge fan of unlikable characters. Naipaul’s ensemble isn’t terribly interesting or dimensional. For all my complaints about Evelyn Waugh, at least that reactionary clown was committed to some kind of beauty. A throwback beauty that came from a repressed Catholicism, but a beauty nonetheless. What do we get with Naipaul? Hari “humming from some hymn book in his cheerless way.”

While I commend Naiapul’s prose powers (his description of a box imprinted with the circles of condensed milk cans and his evocation of gods for the Tulsi house are two of many examples of what make him a commendable stylist), I really don’t see why Mr. Biswas deserves such an expansive volume. He is mean, arrogant, cowardly, and an altogether predictable specimen of 20th century masculinity. He possesses no empathy for the people who surround him, looking at his future wife Shama not with compassion as she is berated by a customer, but “as a child.” He expresses flights of wild behavior that might be characterized as bipolar. He throws fits, feels as if he is entitled to a job. Even in describing Mr. Biswas in the way I am here, I fear that I am making him more interesting he deserves to be portrayed. Naipaul doesn’t give us a real reason for Mr. Biswaa’s ego or his cruelty — despite the fact that we are constantly surrounded by his family, which include in-laws who are too numerous to track without notes. He would prefer to wallow in ugliness — both in the ramshackle aesthetic of rural Trinidad and the boorish behavior of his many side characters. There are unlikable characters and villains in literature who deserve our attention because we want to know how they came to be who they are. But with Mr. Biswas, I never felt any strong pull to know him any further. Mr. Biswas is an unremarkable reader, a mediocre sign-painter, and a ham-fisted writer who never has anything especially interesting to say, but always has an especially monstrous act to mete out to anyone in his surrounding orbit.

So I’m quite happy to be rid of Naipaul. I will never read him again. There are people who still swear by Naipaul. Robert McCrum once declared Naipaul to be “the greatest living writer of English prose.” But what’s the point of picking up the pen when you don’t have a pulse?

Next Up: Richard Hughes, A High Wind in Jamaica!