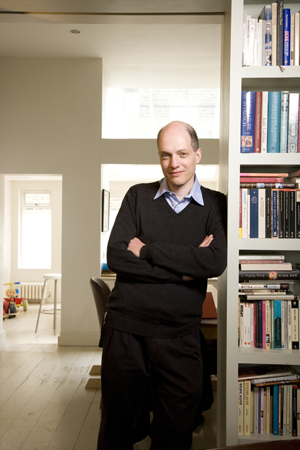 (This is the first of an interconnected two part response involving Alain de Botton. In addition to answering my questions, Alain de Botton was very gracious to send along this essay.)

But on Sunday, de Botton left numerous comments at Crain’s blog, writing, “I will hate you till the day I die and wish you nothing but ill will in every career move you make. I will be watching with interest and schadenfreude.”

As Carolyn Kellogg would later remark, this apparent enmity didn’t match up with the sweet and patient man she had observed at an event. While de Botton hadn’t posted anybody’s phone number or email address, as Alice Hoffman had through her Twitter account, de Botton had violated an unstated rule in book reviewing: Don’t reply to your critics.

But the recent outbursts of Hoffman, de Botton, and (later in the week) Ayelet Waldman — who tweeted, “The book is a feminist polemic, you ignorant twat” (deleted but retweeted by Freda Moon) in response to Jill Lepore’s New Yorker review — have raised some significant questions about whether an author can remain entirely silent in the age of Twitter. Is Henrik Ibsen’s epistolary advice to Georg Brandes (“Look straight ahead; never reply with a word in the papers; if in your writings you become polemical, then do not direct your polemic against this or that particular attack; never show that a word of your enemies has had any effect on you; in short, appear as though you did not at all suspect that there was any opposition.”) even possible in an epoch in which nearly every author can be contacted by email, sent a direct message through Twitter, or texted by cell phone?

I contacted de Botton to find out what happened. I asked de Botton if he had indeed posted the comments on Crain’s blog. He confirmed that he had, and he felt very bad about his outburst. I put forth some questions. Not only was he extremely gracious with his answers, but he also offered a related essay. Here are his answers:

First off, did you and Caleb Crain have any personal beefs before this brouhaha went down? You indicated to me that you found your response counterproductive and daft. I’m wondering if there were mitigating factors that may have precipitated your reaction.

I have never met Mr. Crain and had no pre-existing views. The great mitigating factor is that I never believed I would have to answer for my words before a large audience. I had false believed that this was basically between him and me.

My goal in writing The Pleasures and Sorrows of Work was to shine a spotlight on the sheer range of activities in the working world from a feeling that we don’t recognise these well enough. And part of the reason for this lies with us writers. If a Martian came to earth today and tried to understand what humans do from just reading most literature published today, he would come away with the extraordinary impression that all people spend their time doing is falling in love, squabbling with their families — and occasionally, murdering one another. But of course, what we really do is go to work…and yet this ‘work’ is rarely represented in art. It does appear in the business pages of newspapers, but then, chiefly as an economic phenomenon, rather than as a broader ‘human’ phenomenon. So to sum up, I wanted to write a book that would open our eyes to the beauty, complexity, banality and occasional horror of the working world — and I did this by looking at 10 different industries, a deliberately eclectic range, from accountancy to engineering, from biscuit manufacture to logistics. I was inspired by the American children’s writer Richard Scarry, and his What do people do all day? I was challenged to write an adult version of Scarry’s great book.

The review of the book seemed almost willfully blind to this. It suggested that I was uninterested in the true dynamics of work, that I was interested rather in patronising and insulting people who had jobs and that I was mocking anyone who worked. There is an argument in the book that work can sometimes be demeaning and depressing — hence the title: Pleasures AND Sorrows. But the picture is meant to be balanced. On a number of occasion, I stress that a lot of your satisfaction at work is dependent on your expectations. There are broadly speaking two philosophies of work out there. The first you could call the working-class view of work, which sees the point of work as being primarily financial. You work to feed yourself and your loved ones. You don’t live for your work. You work for the sake of the weekend and spare time — and your colleagues are not your friends necessarily. The other view of work, very different, is the middle class view, which sees work as absolutely essential to a fulfilled life and lying at the heart of our self-creation and self-fulfilment. These two philosophies always co-exist but in a recession, the working class view is getting a new lease of life. More and more one hears the refrain, ‘it’s not perfect, but at least it’s a job…’ All this I tried to bring out with relative subtlety and care. As I said, Mr. Crain saw fit to describe me merely as someone who hated work and all workers.

Caleb Crain’s blog post went up on Sunday. You responded to Crain on a Monday (New York time). You are also on Twitter. When you responded, were you aware of Alice Hoffman’s Twitter meltdown (where she
posted a reviewer’s phone number and email address) and the subsequent condemnation of her actions?

I was not aware.

Under what circumstances do you believe that a writer should respond to a critic? Don’t you find that such behavior detracts from the insights contained within your books?

I think that a writer should respond to a critic within a relatively private arena. I don’t believe in writing letters to the newspaper. I do believe in writing, on occasion, to the critics directly. I used to believe that posting a message on a writer’s website counted as part of this kind of semi-private communication. I have learnt it doesn’t, it is akin to starting your own television station in terms of the numbers who might end up attending.

You suggested that Crain had killed your book in the United States with his review. Doesn’t this overstate the power of the New York Times Book Review? Aren’t you in fact giving the NYTBR an unprecedented amount of credit in a literary world in which newspaper book review sections are, in fact, declining? There’s a whole host of readers out there who don’t even look at book review sections. Surely, if your book is good, it will find an audience regardless of Crain’s review. So why give him power like that?

The idea that if a book is good, it will find an audience regardless is a peculiar one for anyone involved in the book industry. There are thousands of very good books published every year, most are forgotten immediately. The reason why the publishing industry invests heavily in PR and marketing (the dominant slice of the budget in publishing houses goes to these departments) is precisely because the idea of books ‘naturally’ finding an audience isn’t true. Books will sink without review coverage, which is why authors and publishers care so acutely about them — and why there is a quasi moral responsibility on reviewers to exercise good judgement and fairness in what they say.

Hence I don’t for a moment over-estimate the importance of Mr Crain’s review. He was holding in his hands the tools that could make or break the result of two to three years of effort. You would expect that holding this sort of responsibility would make a sensible person adhere a little more closely to Updike’s six golden rules.

In the wake of Updike’s death, partly as a tribute to him, my recommendation is that newspapers all sign up to a voluntary code for the reviewing of books. This will help authors certainty, but most importantly it will help readers to find their way more accurately towards the sort of literature they’ll really enjoy.

If you were to travel back in time on Sunday morning and you had two sentences that you could tell yourself before leaving the comment, what would those two sentences be?

Put this message in an envelope, not on the internet.