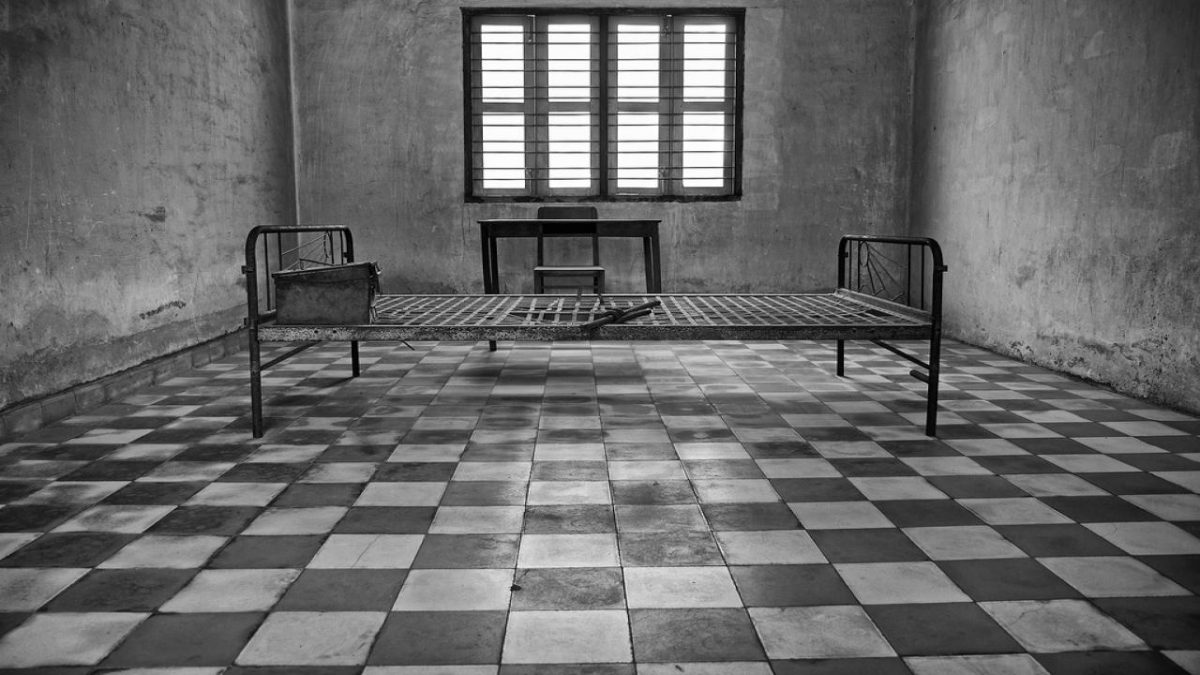 Alex conducts an intake on his backgammon partner, finds his authority as an abrogator challenged, and steps over the line in order to save his own skin.

It was bad form to mutter the first name of a new intake. I had neither seen nor heard from Denise in two weeks and had thought she had merely needed a backgammon break. It turned out that she needed a hiatus from New Amagaca.

She could still spill about us. I knew that she had been a former Black Lives Matter activist, which I admired, although the will to resist had been knocked out of both of us long before. If she fessed the deets of our faux hookups to the thugs who had taken her in, then the department would not have assigned me to conduct the preinquest. There were no cuts or bruises on her face, which typically happened when an intake slandered an abrogator even with solid proof. The volunteers rounding up anti-pleasure detractors were quite sensitive to anyone who besmirched the Ruler’s good name and proud cockamamie principles.

It was my role to lay out the deets of her fail, to learn why she sidestepped the daily seven and why the algorithm had somehow believed in her by not choosing her and why she had been transferred to the Abrogation Department as a candidate for reentry into society. My review be the first word on whether she would be sent to the camps or executed in the wastelands. And regardless of how I felt about her, I would have to be tough and follow the law to the letter.

“I’m sorry that I didn’t meet you yesterday.”

I wished she would stop. I didn’t want to use the implements, all cleaned and delicately arranged on the silver salver prepped at my cedar station.

“Be quiet. I have never seen you before in my life.”

“If you want to live, you must abide by protocol.”

She tried to reach out to me with her hands, but the manacles mired her arms to the cold swampy surface of the stainless steel table. She was shivering on the stool. New intakes were not allowed garb. They had to earn it by showing that they could change. Ben had cranked up the air to help get her changing and the goosebumps shot across every inch of her naked body.

I paced across Chamber 22, which was somewhat smaller than the others on our expansive floor, took the seat across from her, deposited the dossier upon the blotting paper and began poring through the file. The file said that she had been picked up the previous night for crying. I took out a fresh intake form and the inkwell and began filling it out with my quill.

“You will refer to me as Abrogator Schuld. How did you know my first name? Are you an augment? A double agent? Protocol dictates that you must confess your allegiance, if you have any.”

She sniffed. And she stopped crying.

“You don’t. You were crying in public.”

“No. Crying is forbidden. You will have to live with the tears that you sow. Haven’t you been able to find pleasure?”

It was tough playing the stern pedant, but I knew they were watching. Every intake was taped and all the data was fed into the computers, cross-referenced against other behavior so that we would all become better pleasure seekers and offering tips to abrogators on how to correct pleasure apathy in those who rejected it.

“Abrogator Schuld. That is how you will refer to me if you wish to reform.”

I can’t say that I was enjoying this. The booming fans grew louder. There was the sizzle of static from the speaker system above us.

“Is everything all right in there, Alex?”

“How does she know your name?”

The fuzz faded out.

“You know how I know your name.”

I leaned up to her ear and whispered, “Do you want to live? You’d better stop knowing me.”

Later I would wonder if it was Ben who sold me out. It was easy to latch onto an abrogator’s feed, to put one’s eyes into another for as long as you needed to. This was how they got Harris two months before. He was a good abrogator, but he refused to hook up and had made the mistake of going a month without a fuck. His success rate with the intakes had not been enough to overturn his disappearance. Unlike other municipal positions, abrogators were required to wear networked contacts, although this was not so tightly enforced because the saline supply was short and it seemed too much of a burden to pound the iron fist so long as the abrogators could ensure that the government could save lives and resources. My contacts were still in my billet, which I hadn’t seen in two days. It was wise to put on the contacts intermittently. You were supposed to work hard and play harder. You were supposed to find time for pleasure even when the paperwork was tall and vertiginous. So the eyes in the sky looked the other way provided they could track your GPS location and the ratings continued to pour in from the citizens.

“Why are you here?” I asked Denise.

“You made the choice to cry.”

There was a pause. And she continued to sob some more.

I looked at the places in the wall where they had hidden the cameras. You didn’t get too many pregnant intakes. So I knew that Denise’s tale was being captured and streamed for the highlights reel projected during Friday happy hour. Pregnancy was supposed to be reported upon discovery. You didn’t have to report the hookup who knocked you up, but the government did need to know you were expecting so that it could provide fertility measures for a new citizen building a better tomorrow. The data was always reliable in anticipating who was pregnant. Morning sickness, mood swings, and faintness before detecting a missed period were always discoverable in the reviews and what you confessed to the social networks.

“Then why didn’t you honor Scott Baio’s memory and go to a designated suicide zone?”

Before Baio had sacrificed himself at the Virginia Massacre, he had gone off the deep end and said that he would personally go to Virginia and deal with the troublemakers. In a desperate bid for attention, Baio had spouted a tirade on what was then known as Twitter about how women needed to shut up and listen to men and reproduce without question. And then came his sacrifice and his disgraceful lionization. The Ruler believed in television and nostalgia and he had whimsically renamed a prominent bridge in his name to “be down with the kids,” who often shambled down the streets of Williamsburg wearing ironic Napoleon Dynamite T-shirts and not really understanding what was going on, even with the rise of riverfront monstrosities, until it was too late. They had once been called hipsters and their detached attitude proved instrumental in helping to make the Great Turnover happen.

Denise looked at me with desperation. I wanted to save her. But I also needed to save myself.

“Fuck you, Alex. I will tell them EVERYTHING!”

“Wh…what are you talking about?”

“Our backgammon games. Our fake hookups.”

There was the rustle of static.

“Don’t make us send you to the camps. You can be a citizen!”

“I’ve run out of fucks to give. Execute me. Execute this kid growing up in my stomach. You told me you cared.”

“Or you’ll do what? Don’t paint yourself as a hero. You’re just as bad as all the other men. And I will NOT be silenced.”

“I understand that you are under duress.”

“I never liked backgammon. And I never liked you. I was lonely and I was tired of hooking up. But I had to anyway. And now I have this….this wretched thing kicking inside me.”

As an abrogator, you could never let an intake belittle your authority. Sure enough, there were beeps on my phone. Downvotes from Ben and the abrogators who were watching.

“You have one minute to retract.”

My rating had dipped to 4.1. I couldn’t go back to being a three.

I grabbed the gun on the implement tray and shot her in the head. Denise’s blood stained my beige coat. I didn’t look at her. I didn’t want to see the dead look in her eyes, even though the dead look was quite present in everyone who was alive. This was an unorthodox move, given that abrogators were supposed to preserve lives. I didn’t know how this would play out. Applause erupted over the speaker system.

I knocked on the chamber entrance. My rating had climbed back up to 4.2. A cleanup team arrived to remove Denise’s corpse.

Ben was the first to congratulate me in the hall, slapping me on the shoulder.

Samantha was there with him. She was beaming. But I think she was more flush from her romp with Huld.

“That was great, Alex! She really seemed to think she knew you.”

My stomach had twisted into nauseating knots. I had never killed anyone before. This was against everything that I stood for. I had become just as bloodthirsty, just as willing to save my own skin, as the starving mobs who gathered outside the death house every day at seven o’clock. Maybe Dottie had known me better than I realized. Maybe she really did remember the five years we had together and knew how I’d change if the world went mad. In hindsight, it had been naive to think that I would not be violent when killing had become the new norm.

“I hope you’re not feeling sick.”

“No,” i said, thinking of the ward where I would have to fuck six people each day. “Not sick. Personal time.”

“Well,” said Samantha, “if you ask me, it’s long overdue! Alexander Schuld is one of the best abrogators we have in this department. And if you’d like to go somewhere right now…”

It was rare to be asked to hookup outside of the digital. And you couldn’t turn down a Vice President without suffering severe downranking.

The office cheered Samantha grabbed my hand and took me into her office, where I performed as well as I could under the circumstances.

Next: The Limits of Moral Depravity (Chapter 9)