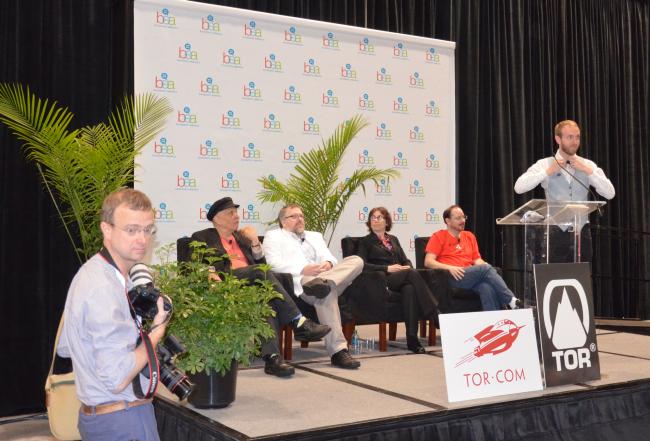 Can four well-regarded authors discuss science fiction at BEA? Or do a few of them need hugs?

They congregated just before lunch at the Upstairs Stage, hoping to get some thoughts on a future weirder than ham on rye. Some of their faces were young and fleshy, and I heard a few talk about authors who sent work contained within a pizza box. Some were older bespectacled men who might have still believed in a dream cut out of the cloth of hard independent labor. Whatever their reasons for being there, this did not prohibit author John Scalzi from waving an impish toodle-oo just before this business of “crossing over,” or perhaps “passing” as genre in the mainstream, was initiated just after the stroke of noon.

The moderator was a man named Ryan Britt, his gray vest insinuating some classy authority. But his promising role waned a mite when he stated, “Everything that relates to genre fiction is extremely weird.” Plenty of us have experienced “weird” moments in our lives without having to cleave to genre. That’s the problem. How do the glories of “weird” in any form get any self-respect?

The other big question was whether Walter Mosley would attempt to rile up the crowd with an outlandish and unsubtle statement.

But before Mosley opened his mouth, Jeff VanderMeer, co-editor of a massive new anthology devoted to weird fiction called (what else?) The Weird (the other editor is his wife, Ann VanderMeer, who was also present at the panel), wisely suggested that weird fiction contributed to the 20th century in much the same way that fairy tales had bolstered the years before that.

These stories “take a look at possible futures based on what we were in the past,” added Ann VanderMeer. “It’s an exploration of the unknown.” Did looking at a “weird” future offer an explanation for the present? For that matter, why did “weird” have to be so time-sensitive?

John Scalzi, author of Redshirts and the sharpest and most vibrant contributor to the discussion, pointed out that the flip phone had emerged because some engineer at Motorola had wanted to talk like Kirk on Star Trek. And while Scalzi was wearing a red shirt undoubtedly for the sole purpose of pimping his novel, it was evident that he was making a larger point about how fiction offers cues for how we live in the real.

“My daughter was freaked up beyond measure about the dude who chewed off his face in Florida,” continued Scalzi. “And it wasn’t just her.” The government had actually issued a statement clarifying to the public that what was happening was not the zombie apocalypse. “Well, that’s what the government would say,” responded his daughter. But it was, Scalzi added, a metaphor we could all relate to.

Stories may “take place in the future or they may be written in the alternative world. But they’re being written for today.” Such a distinction was not limited to fantasy fiction, but was eminently pragmatic applied across the whole. “The idea that you take what people know and give it a twist makes absolute sense as a writer.”

Jeff VanderMeer suggested that good weird fiction was comparable to “a frog in a hot pot” or “the idea of being acclimated by something.” Mosley took this idea of tangibility with narrative further, noting that Gogol’s Dead Souls carries the notion of a man buying and selling dead people for a profit.

But Mosley wished to stir people up. So he brought up the pre-Lando installment of Star Wars. “As far as I can tell, everyone had blonde hair and blue eyes. That may be unconscious wish fulfillment.” I had hoped that the moderator would be brave enough to tell Mosley that Carrie Fisher not only had brown hair and brown eyes, but even had the temerity to put up her hair in a bun. But nobody wanted to mess with Mosley. He was doing just fine carrying on his impersonation of Hooper X from Chasing Amy, except that he didn’t have the benefit of Kevin Smith writing sharp dialogue.

“One of the things walking around this place is how many white people are. And it’s another weird moment. Maybe it’s a weird moment for me, not for other people in here.”

There wasn’t really much that people could say to this, and I didn’t see any fist pumping in response to Mosley’s remark. I did observe Jeff VanderMeer, dressed in a white suit and seated next to Mosley, sink further into his seat. Ann VanderMeer attempted to return the conversation to the human factor that Scalzi had set up so well. Jeff VanderMeer attempted to respond to Mosley by pointing out that the duo had selected stories “from Japan, from Nigeria, from all over the place.” Mosley spent much of the time after this puffing up his cheeks. (But to his credit, he was the only one up there who brought up Samuel R. Delany. Nobody mentioned the New Yorker‘s recent science fiction issue.)

Then Mosley tried to pass off Scalzi’s anecdote about the Star Trek communicator as his own. “It was the kid who was watching Star Trek and said, ‘Wow, I would want to make that!'” Hadn’t we heard a more concise version of this story only minutes earlier?

Scalzi attempted to steer the conversation back on track, pointing out that Ayn Rand and Steve Jobs were likely to be just as significant to culture ten years from now. “Technology has always been about keeping the threads of the past continuing to be in the fabric of the future,” said Scalzi, “regardless of whether the technology is a codex or the technology is a hologram of Tupac.”

To this, Jeff VanderMeer added cynical relish, “I think technology comes off as too bloodless for me.” He pointed to a story he had written about half-dead bears that devour you alive if you expect to engage in transdimensional travel. “If you want to travel, you really have to want to travel.” He praised the later iterations of steampunk for exploring these issues. “It’s great to aspire to perfection. But actually achieving it is a kind of insanity.”

Did the panel turn into a dead shark?

“I’ve been on these panels before for the last twenty years,” added VanderMeer. “I’m less optimistic that they really mean anything aside from cross-pollination.” He then added that one future pastime might be “sorting through the rubble for the remains of books that were published before the ebook revolution.”

“Jeff VanderMeer,” asked Scalzi. “Do you need a hug?”