We’ll give Tanenhaus half a brownie point this week because it’s close to Xmas. This week’s NYTBR is a big mixed bag. We advise against the continued employment of Joe “I Never Met A Subject I Didn’t Hate” Queenan (along with the end of silly photo captions such as “Johnny Unitas of the Colts” asuming that educated folks aren’t familiar with football legend-team associations). But we dug the Truman Capote profile, which combined biography, light critical consensus and some naughty bits into a hot essay by the always excellent Daniel Mendelsohn.

However, Laura Miller needs to get out of the house more. We take pride in our dirty minds, pointing out that sexual suggestion and naughty jokes come with most of our book recommendations (some over the course of our lives, in flagrante delicto), while recommending that intercourse itself is best performed rather than endlessly talked about.

This week’s New York Times Book Review features a review from Margaret Atwood on Turkish writer Orhan Pamuk (along with an interview), a measured essay on John Kerry from Hitch, a poetry roundup, a Breslin profile, and a healthier ratio of fiction-to-nonfiction coverage. With the exception of this digressive review of Robert Olen Butler’s Had a Good Time, this is a very nice rebound from last week’s Wieseltier catastrophe, finding a suitable balance between Tanenhaus’s nonfiction interests and the fiction coverage long promised. However, sustained fiction coverage is the operative name of the game. We’ll be pleased if Tanenhaus delivers, with particular foci upon debut authors and off-the-beaten-track titles. But to ensure that he does, we’ll be initiating a Tanenhaus scorecard every week. 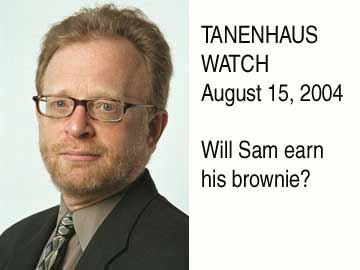 TOTAL NUMBER OF BROWNIE POINTS FOR AUGUST 15, 2004: 3
Does Sam Tanenhaus Get a Brownie This Week? Yes (minimum 3 brownie points needed to score brownie)

Under Tanenhaus’s firms hands, it appears that the NYTBR has begun issuing corrections. The corrections, as usual, are laced with the kind of minutiae that will prevent merely a handful of fulminating fanboys from slashing their wrists. However, given the pedantic obsessions, we here at Return of the Reluctant encourage Tanenhaus & Friends to continue. Here are a few that we suggest:

“A review by Michael Kinsley suggested that David Brooks be bitch-slapped three times. Mr. Kinsley actually intended for Brooks to be bitch-slapped four times, not three. In addition, Kinsley would like to kick Brooks’ ass while he is being simultaneously humiliated by a Girl Scouts troop.”

“When pressed by editor Sam Tanenhaus for an ‘innovative’ idea for her column, Laura Miller referred to ‘lingering headaches’ and turned out a silly column about spy stories. She followed this up with an epileptic fit and demanded a Ritalin prescription. The Times regrets any misinterpretations caused by Miller’s histrionics.”

“Lizzie Skurnick intended to use ‘fuck’ in her review, but it was gently suggested to Ms. Skurnick that the Times was a family newspaper. The Gray Lady hopes to let down her guard, however, in the event that Mr. Bush is re-elected in November.”