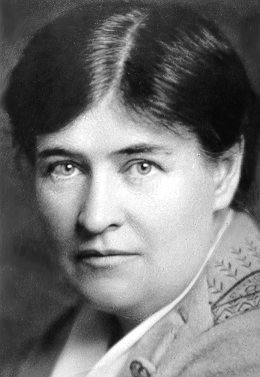 It’s the death day of Willa Cather, who passed away sixty-three years ago on April 24, 1947. The word “dead” can be found seven times in Cather’s O Pioneers!, which was written when Cather resided in Cherry Valley, New York. According to the 2000 Census, Cherry Valley has a population of 1,266 — a number that might be considered “dead” by self-important urbanites, but that is perfectly respectable in this writer’s humble opinion. Cather also wrote a novel called Death Comes for the Archbishop (more “deads” here than O Pioneers!), which is listed on the Modern Library’s 100 Best Novels list.

Cather died from a cerebral hemorrhage in a Park Avenue apartment she shared with journalist Edith Lewis (also Nebraskan and also dead, but not on April 24). According to Lewis, Cather was “never more herself than on the last morning of her life; her spirit was high, her grasp of reality as firm as always.” Lewis remains mum on whether Cather was “never more herself” after the cerebral hemorrhage. But I suspect that, discounting any religious beliefs some of you fellow writers may have, Cather’s spirit did not quite rise to the previous morning’s apotheosis.

The two women lived together for four decades. Some scholars have speculated that there was more going on than a super-intense friendship. But since the two women are both dead, I don’t believe it’s germane for us to contemplate if they were Sapphic exemplars or friends with really nice benefits. What Cather and Lewis did was their business. And if they wished to take it to the grave, this was their choice.

Lewis wrote a book called Willa Cather Living: A Personal Record, revealing that, as a teenager, Cather read Latin with Billy Ducker. Lewis writes that, shortly after Ducker and Cather had gone for a walk, Ducker was found dead on the couch in his living room, with a copy of the Iliad lying open on the floor. Cather had an innate distrust of modern science, in large part because it had created numerous weapons that permitted human beings to kill each other more efficiently. Let us therefore dispense with reasonable conclusions and narrow the cause of this death to two possibilities: either Homer killed Ducker or Cather killed Ducker. Lewis reported that one of the last things Ducker said to Cather was “It is just as though the lights were going out, Willie.” For those writers wishing to draw further conclusions about this anecdote, I recommend listening to this Journey song, replacing “city” with “Nebraska.”