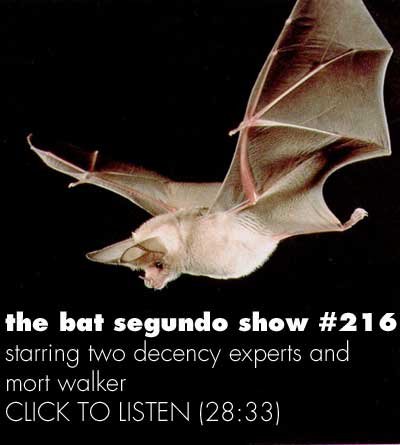 Condition of the Show: Observing fifty years of development.

Subjects Discussed: Walker’s drawing pace, the Beetle Bailey production cycle, filtering through the gags, rejected strips sent to Sweden, Beetle’s early days as a slacker in college, the military as the common experience, Walker’s relationship with the syndicate, the curly hair look of Buzz and Lois, portrait-like illustrations of women, early attention to background, the shrinking space of newspaper comics, Berkeley Breathed and Bill Watterson’s fights for space, appealing to the greatest number of readers, the development of Sarge’s girth and teeth, Plato as the only other character carryover, covering the eyes of characters, Dik Browne, Beetle’s early square form and perpendicular limbs, Walker as Lt. Fuzz, Lt. Jack Flap, African-American characters in comic strips, being confronted by editors by Ebony, Colin Powell’s approval of Flap, code numbers associated with the comic strip, writing a military-based comic strip without reference to Iraq, General Halftrack’s skirt-chasing and later sensitivity training, the circumstances that will cause Walker to change his strip, why Walker hasn’t included women soldiers, aborted cliffhangers, and characters staying the same in the Beetle Bailey universe.

Correspondent: Here we have a military strip. But there’s no reference to Iraq. And I wanted to ask you about this kind of balance.

Correspondent: But to talk about the broader audience, I mean, Bush’s approval rating isn’t exactly the best in the world. It’s under 30%. So you have 70% of the audience if you were to play around with this kind of thing.

Walker: Yeah. Well, anyway, I try not to get too topical or controversial. That’s why I’ve avoided the war pretty much. I don’t mention Iraq very much. Very seldom.

Correspondent: Even though this war has lasted longer than World War II? I mean, doesn’t it seem…?

Walker: But there’s so many people that are angry about it that I’ve got to be really careful about how I treat it. Mostly, I just ignore it. People say, “Well, when is Beetle going to go to Iraq?” I said, “Jesus Christ. I hope never!” You know, I don’t want to send him there because it’s very difficult to deal with. I’m just keeping him in basic training. It’s the common experience that all soldiers have. If I take him out somewhere and specify into some particular kind of work, I’ll lose a lot of my readers there. They won’t be interested or they won’t understand it. But everybody understands basic training. That’s where I keep him.

Correspondent: I mean, you had this similar situation with Jack Flap. That’s why I present this as well. I mean, that didn’t hurt you. In fact, that got Beetle Bailey more attention, you know?

Walker: Yeah, but it was a common experience. Anyway, that hasn’t hurt me.

This week, nine new installments of The Bat Segundo Show were released from the factory. I’ll be cross-posting the full capsules here at Reluctant Habits (the new preposterous name of this place) as soon as I find some time to complete them. (Books are now migrating their way to the new location, and this has been keeping me busy.) But for those who wish to plunge into the conversations right now, here’s a list of recent shows:

206. Sarah Hall. Hall, the recent winner of the James Tiptree Award, is an extraordinary writer. I’ve written a piece on all three of her books that will be appearing at another place. But in the meantime, you can listen to the nearly 70 minute conversation we conducted on her work as a whole. We carried out despite fire alarms and some lively debate.

207. David Hajdu. Hajdu is the author of The Ten-Cent Plague, but this conversation touches largely upon much of the journalistic methods he used in tracking down some of his subjects.

208. Tobias Wolff. This conversation has been excerpted elsewhere. Wolff was guarded, but he gradually warmed up as the conversation progressed, offering some interesting insights into how he puts together a short story.

209. Sloane Crosley. Ms. Crosley is regrettably known more for her shiny hair than her essays. Hopefully, this discussion will rectify this impression.

210. Cynthia Ozick. I was greatly honored to talk with the wonderful Ms. Ozick, winner of two recent lifetime achievement awards, a few days before her eightieth birthday.

211. Ed Park! Ed Park has written a very good debut novel. I had so many observations about his book that I had to cram into our conversation that we ended up talking for more than an hour.

212. Fiona Maazel. Despite the intrusive presence of a coffee grinder, Fiona and I managed to talk more or less intelligibly about Last, Last Chance.

213. Steven Greenhouse. I reviewed Greenhouse’s The Big Squeeze for the B&N Review last week. This conversation reflects some of my observations and delves into very important labor issues.

214. Ralph Bakshi. One of my most anarchic interviews, but in a very good way. If you aren’t aware of Bakshi’s accomplishments in underground animation (Fritz the Cat, Heavy Traffic, Coonskin), you’ll want to give this a listen.

215. Christian Bauman. We were ejected from a Midtown diner midway through our conversation, but this didn’t stop Mr. Bauman and I from discussing In Hoboken, which Mr. Bauman assures me is a “folk novel” and not a “rock ‘n’ roll novel.”

216. Mort Walker. The creator of Beetle Bailey reveals a number of unexpected attitudes about war and women.